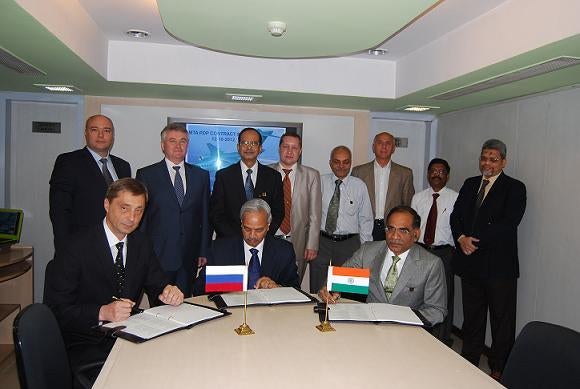 The contract is a follow-on deal to a general contrac previously signed by the three companies in May 2012.

HAL chairman RK Tyagi said the companies will immediately commence the preliminary design work at Moscow, with 30 HAL designers will be based at UAC-TA.

A detail design phase (DDP) contract is expected to be signed to start work on the MTA, following the completion of HAL’s PDP contract.

Design and development work is scheduled to be conducted at HAL’s Aircraft R&D Centre (ARDC) at Bangalore, while the MTA prototype and subsequent serial production will be carried out at its Transport Aircraft Division (TAD) at Kanpur, India.

Other HAL R&D centres and manufacturing divisions will be responsible for production of systems and line replaceable units (LRUs), components, sub-assemblies and composite structure.

An Inter Governmental Agreement was signed between HAL and UAC-TA in November 2007 for the production of 205 MTA, of which 100 are intended for the Russian Air Force, 45 for Indian Air Force (IAF), while the remaining 60 will be supplied to third-party nations.

The aircraft’s first test flight is expected in 2014, followed by entry into operational service by 2016.