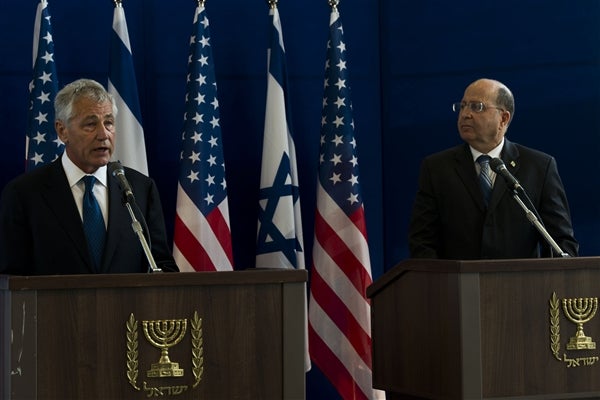 The US has signed a multi-billion dollar deal with Israel to supply a package of new defence capabilities that will enable the country to maintain air superiority in the future, US defence secretary Chuck Hagel has confirmed.

”These decisions underscore that military-to-military cooperation between the US and Israel is stronger than ever,” Hagel added.

Noting that the defence cooperation will continue to deepen in future, Hagel said the V-22 vertical takeoff and landing (VTOL) aircraft will provide IAF with long-range, high-speed maritime search-and rescue-capabilities to help deal with a multitude of threats and contingencies.

Besides routinely collaborating with Israel in development of Iron Dome, Arrow, and David’s Sling defence systems, the US Department of Defense (DoD) also ensured the country received an all-time high of $3.1bn in foreign military financing this year despite budgetary constraints.

”To date, the United States has provided more than $460m to support [that] program, and we are requesting another $220m in our fiscal year 2014 defence budget request for Israel to acquire additional Iron Dome batteries,” Hagel added.

The US is also planning to start work on a new multi-year memorandum of understanding (MoU) that will extend security funding for Israel beyond 2017.

The defence secretary, who is currently on a six-day official visit to the Middle East, also had a dialogue with his Israeli counterpart, which is believed to have been dominated by concerns over the Iranian nuclear programme and civil war in Syria.

Hagel is also scheduled to visit Jordan, Egypt, Saudi Arabia and the UAE before returning back to the US on 26 April.

The Armored and Counter IED Vehicles Market in Israel to 2024: Market Brief

The Military Ammunition Market in Israel to 2023: Market Brief

The Electronic Warfare Market in Israel to 2025: Market Brief

The Electronic Warfare Market in Israel to 2024: Market Brief

The Military Infrastructure and Logistics Market in Israel to 2024: Market Brief