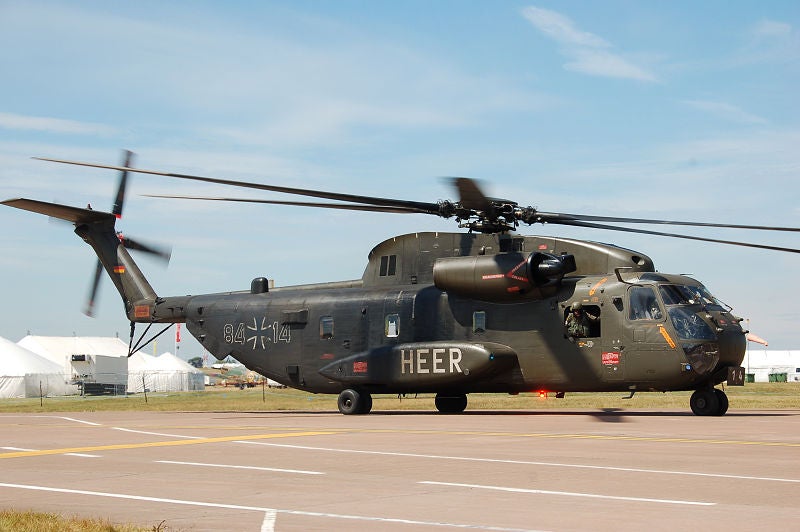 The pallet-mounted MTA systems were delivered by the company as part of the CH-53 personnel recovery (PR) capability upgrade package in the middle of 2012, as reported by Shephard.

Workstations are scheduled to be installed as role equipment onboard all 20 CH-53GS and six CH-53GE medium transport helicopters, which are currently in use with the air force.

A military derivative of ESG’s police tactical workstation (PTA), the MTA is designed to enhance the pilot’s situational awareness by receiving position data and text messages from military personnel locator beacons and displaying it to the cockpit crew.

"Workstations are scheduled to be installed as role equipment onboard all 20 CH-53GS and six CH-53GE helicopters."

The system is capable of receiving data from COSPAS-SARSAT emergency locator transmitters due to the wide 30-407MHz frequency spectrum reception capability of its direction finding equipment, which enables it to perform search and rescue (SAR) missions.

A personnel locater system, a broadband radio unit and connections to the internal and satellite communications systems are present as controls in the workstation for the operation of additional sensor systems present on the helicopter.

The MTA software is equipped with a FalconView-portable flight planning software (PFPS) mapping application that provides centralised information processing and a clearly structured user interface, which is widely operated by the US armed forces and Nato allies.

The system has also demonstrated its ability to enable the operation of an unmanned aerial system from a CH-53 helicopter during a series of simulation experiments in the middle of 2010.