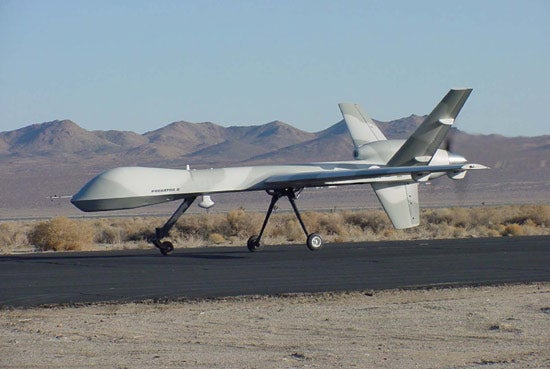 General Atomics Aeronautical Systems (GA-ASI) has conducted flight testing of its prototype Due Regard Radar (DRR), to explore concepts for safe integration of remotely piloted aircraft (RPA) in the National Airspace System (NAS).

During testing, which was carried out at GA-ASI’s Gray Butte Flight Operations Facility in Palmdale, California, US, the radar was installed onboard the company-owned Predator B unmanned aerial vehicle (UAV) and controlled from the aircraft’s ground control station (GCS).

GA-ASI Aircraft Systems Group president Frank Pace said detection of airborne vehicles that are not equipped with transponders will play a significant role in safe integration of RPA into the NAS.

"The prototype Due Regard Radar is a critical component of GA-ASI’s sense and avoid system, facilitating collision avoidance onboard the aircraft and allowing the pilot to separate the RPA from other air traffic in cooperation with air traffic control [ATC]," Pace added.

A company-owned King Air aircraft served as the non-cooperative intruder aircraft during the testing, and was simultaneously detected and tracked along with several other aircraft in vicinity by the DRR using its actively electronically scanned array (AESA) technology.

The resulting aircraft tracks were downlinked to the GCS through satellite communications followed by display on an engineering graphical user interface (GUI) and correlation and validation with a radar feed from ATC.

The testing was aimed at confirming the ability to integrate DRR onto a Predator B aircraft, and also to detect and track intruder aircraft.

The company is continuously adapting the DRR prototype into a mature solution capable of addressing the full FOR and accuracy requirements specified for test flights in the NAS. Flight tests on both RPA and manned aircraft are expected to continue during 2013.