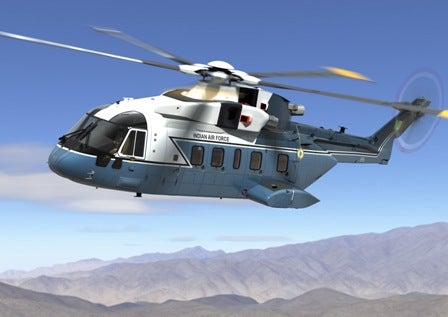 Italian aerospace and defence company Finmeccanica’s chairman and chief executive Giuseppe Orsi has been arrested by the national police, over corruption allegations relating to a €560m contract for the supply of 12 AgustaWestland AW101 helicopters to India in 2010.

Orsi, who had been under investigation for several months regarding alleged financial malpractices, was arrested by the Italian authorities for questioning over charges of bribing intermediaries to secure the contract.

About €50m is suspected to have been paid in bribes by the state-controlled company, according to prosecutors, who searched Finmeccanica and AgustaWestland offices in Rome and Milan.

News
US and Australian air forces sign joint vision statement
Data Insights
View All
"About €50m is suspected to have been paid in bribes by the state-controlled company."

Prosecutors have further alleged that Orsi, who is yet to be charged, attempted to interfere with the investigation, even though he rejected any wrongdoings in the deal, as reported by local news agencies that obtained copies of the arrest warrant.

The Indian Ministry of Defence (MoD) has decided to refer the case to Central Bureau of Investigation (CBI) for separate inquiry, citing the foreign ministry has not received any specific inputs from both the Italian and UK Governments.

India has so far received three helicopters, while delivery of the remaining nine choppers is expected to be put on hold in the wake of latest developments, as reported by Zee News.

Image: An AW101medium-lift helicopter during its flight. Photo courtesy of © 2012 AgustaWestland.