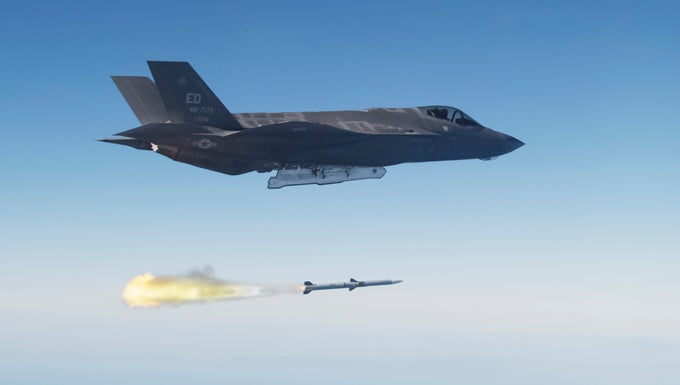 The US military’s F-35A conventional take-off and landing (CTOL) aircraft has conducted the first live-fire launch of an AIM-120 advanced medium range air-to-air missile (AMRAAM) against an aerial drone target at the F-35 Integrated Test Facility at Edwards Air Force Base in California, US.

Designated as the AF-6, the aircraft successfully identified and targeted the drone using its mission systems sensors, and subsequently passed the track information and launched the missile from its internal weapons bay for target engagement.

The missile followed an intercept flight profile following target acquisition, and received a self-destruct signal to preserve the drone for future use.

F-35 Joint Program Office weapons team lead Charlie Wagner said the successful missile launch represents an initial demonstration of the air-to-air combat capability the aircraft will bring to the US military and its international partners.

"It is one test, with many more to come, to ensure operators will receive the combat capability they need to execute their mission and return home safely."

"This test represents the culmination of many years of careful planning by combined government and contractor teams,” Wagner said.

”It is one test, with many more to come, to ensure operators will receive the combat capability they need to execute their mission and return home safely."

The F-35A air-to-air missile testing comes a day after the successful firing of a 500lb Guided Bomb Unit-12 (GBU-12) Paveway II laser-guided bomb by the F-35B aircraft over a test range at Edwards Air Force Base.

Powered by a solid-propellant rocket motor, the AIM-120 is a beyond-visual-range air-to-air missile (BVRAAM) designed for all-weather, day-and-night operations, and represents the US military’s standard air intercept missile carried on tactical fighter aircraft.

Image: An F-35A CTOL aircraft during its first live-fire launch of an AIM-120 AMRAAM missile at Edwards Air Force Base in California, US. Photo: courtesy of USAF.