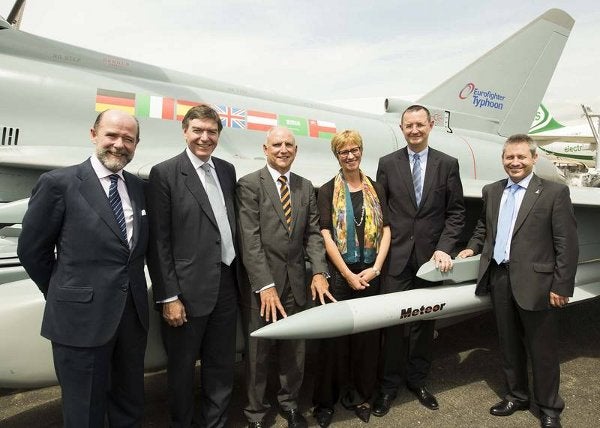 Eurofighter and Nato Eurofighter and Tornado Management Agency (NETMA) have inked a contract for installation of the Meteor beyond visual range air-to-air missile (BVRAAM) on Typhoon multi-role combat aircraft.

Signed at the ongoing 2013 Paris Air Show in Le Bourget, France, the contract allows for the secure integration of the missile on Typhoon fighters of four partner nations, including Germany, Italy, Spain and the UK.

The ramjet-powered missile has already been test fired from a Typhoon, instrumented production aircraft 1 (IPA1) by Eurofighter partner company, BAE Systems’ pilot over the Qinetiq firing range in west Wales, UK, in December 2012.

The latest contract will support further design and test work on the missile, which is scheduled to be carried out by BAE, Cassidian, Alenia Aermacchi in the UK, Germany, Italy and Spain.

"These latest developments confirm the growing momentum of the Eurofighter enhancement programme which is delivering real capability to our customers."

”When coupled with a range of other enhancements we are bringing into the programme, this will further secure the aircraft’s position as best-in-class offering customers unrivalled levels of performance, reliability and support."

UK Defence Equipment, Support and Technology minister Philip Dunne, who attended the signing ceremony, said: ”Meteor will provide the RAF with a world-leading air-to-air weapons capability and improve prospects for export of the Meteor missile and the Typhoon weapon system.”

Capable of autonomously engaging air targets during day and night, and in all-weather conditions, the missile is expected to complement with the aircraft’s existing missile systems, providing pilots with greater choice of weapons during combat.