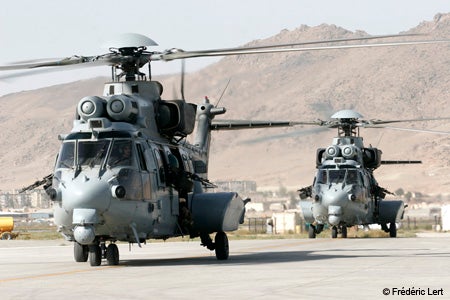 The Kazakhstan Government has signed a letter of intent with Eurocopter for the purchase of 20 EC725 medium transport helicopters to be used by the Ministry of Defence (MoD) for a range of mission applications.

The aircraft will be assembled in-country alongside the 45 EC145 light-twin helicopters being assembled in Kazakhstan under a framework contract by Eurocopter Kazakhstan Engineering, a 50/50 joint venture company.

The agreement was formalised at the KADEX-2012 military exhibition held in Astana, Kazakhstan, from 3 to 6 May, 2012.

"Based on both a long term plan and mutual trust, our joint goal is to create a sustainable helicopter industry in Kazakhstan," said Lambert.

Based on the Eurocopter AS532 Cougar helicopter, the EC725 is a medium-sized (11t), twin-engine helicopter designed to conduct a wide range of missions such as tactical troop transport, search and rescue, combat search and rescue, maritime surveillance, medical evacuation and shipborne operations.

The helicopter offers superior flight autonomy and features high-performance navigation and mission systems, a unique digital four-axis autopilot including a large cabin with accommodation for 25 persons enabling its use for tactical transport missions.

Equipped with a de-icing system, the multi-role EC725 is designed for operations from land and ships, and is qualified for flight in cold weather conditions.

The helicopter has been deployed in Caracal version by the French armed forces to Afghanistan and is also ordered by several military services worldwide including Brazil, Mexico, Malaysia, and most recently Indonesia.

The Republic of Kazakhstan already operates the civil version of the EC725, EC225 rotary-wing aircraft for governmental VIP transportation missions.