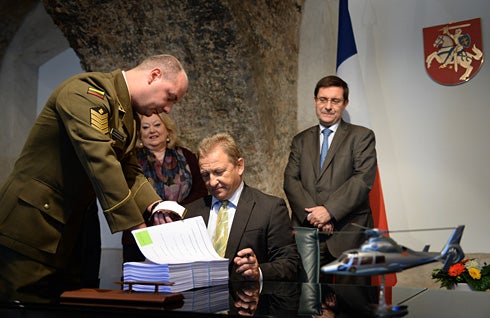 Eurocopter has secured a contract for the supply of its AS365 N3 Dauphin helicopters to the Lithuanian Air Force (LAF) for countrywide search-and-rescue (SAR) operations. Awarded by the Lithuanian Ministry of National Defence, the contract covers delivery of three Dauphin helicopters with around-the-clock availability, and involves financing support from the European Union (EU). Speaking during the contract signing ceremony, Lithuanian National Defence Vice Minister Marijus Velika said the helicopters will help the air force fulfil SAR missions and also perform environmental monitoring and control that are of high importance for Lithuania. ”Therefore, by signing this contract today we assure that the Lithuanian Armed Forces will be able to help save people’s lives and promptly respond to various crises in the future,” Velika said. Eurocopter Northern Europe Sales head Jacques Cardaillac said, ”Eurocopter will provide its full support to the settlement in Lithuania of this important new service, taking the AS365 N3’s already demonstrated mission capabilities in the most challenging operational conditions.”

"The Dauphins will join the Eurocopter EC120, EC135 and EC145 helicopters, which are currently operated by the Lithuanian Border Guard."

The Dauphins will join the Eurocopter EC120, EC135 and EC145 helicopters, which are currently operated by the Lithuanian Border Guard for security and law enforcement duties. Besides SAR missions, the Dauphins are also expected to be available for drought and floods effects observation, crop conditions and plant disease tracking, as well as the monitoring of marine pollution and other environmental dangers. Powered by two powerful Arriel 2C turboshaft engines, the AS365 N3 is Eurocopter’s latest member in the Dauphin helicopter line, featuring a glass cockpit and a four-axis autopilot to enable SAR operations in high altitudes and extreme climatic conditions. The 4.5t class helicopter is widely used by military, parapublic and civilian operators worldwide, including the French and Bulgarian navies and the Japan’s Fire and Disaster Management Agency (FDMA) . Deliveries under the contract are scheduled for completion in 2015.