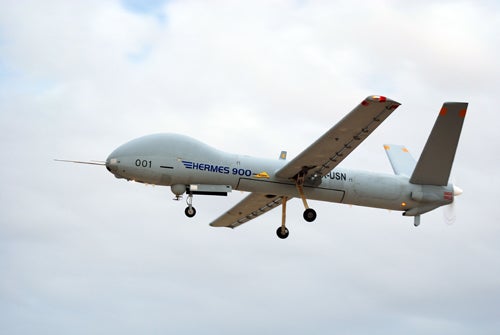 Israel’s Ministry of Defense (IMOD) has awarded a contract to Elbit Systems for the development of advanced features for the Hermes 900 unmanned aircraft system (UAS).

Valued at $35m, the contract covers development of advanced capabilities, including quick re-configuration of the UAS’s payloads, for systems originally ordered by the IMOD for the Israel Air Force (IAF) in December 2012.

"The IMOD’s decision to award this development contract reflects the trust and recognition of our technological capabilities and further strengthens our long-term strategic cooperation with the Israel Defense Forces (IDF) in the UAS field,” Aharonson added.

Under the terms of the $90m contract, the company is scheduled to supply an undisclosed number of Hermes UAS units within three years and provide maintenance services during a period of eight years.

Weighing 970kg, the UAS is capable of flying at a maximum altitude of 30,000ft, with an endurance of more than 30 hours, and is primarily used to capture and transmit real-time battlefield imagery to a universal ground control station (UGCS).

The UAS features a fully automated take-off and landing even under adverse weather conditions, and is also operated by the air forces of Chile and Colombia, as well as the Mexican Federal Police.

The UAV Payload Market in Israel to 2025: Market Brief