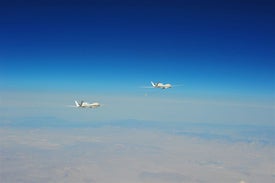 The US Defense Advanced Research Projects Agency’s (DARPA) Autonomous High-Altitude Refueling (AHR) programme has moved ahead with the successful completion of close-proximity flight tests at Edwards Air Force Base in California, US.

During the 2.5hr close-formation flight, two modified NASA RQ-4 Global Hawk UAVs served as tanker and receiver aircraft, and operated at a distance of 100ft or less between refuelling probe and receiver drogue, at an altitude of 44,800ft.

The aircraft also flew as close as 30ft, for the first time ever, enabling measurement of full aerodynamic and control interactions.

"Coupled with the advanced design and technical implementation of aerial refueling systems on board both aircraft, the demonstration has truly brought a concept to life, which has the potential to change the operations for unmanned aircraft utility and enable mission flexibility never before realised," Ricker added.

The resulting data was then analysed and integrated into simulations for further validation of system safety and performance through contact and fuel transfer, including the effects of turns and gusts up to 20k.

A series of demonstrations, including tanker and receiver first flights and a distant formation tests, were also conducted by the team in preparation for close formation tests, simultaneously maintaining all required safety precautions and measures.

Valued at $33m, the DARPA’s AHR programme aims to demonstrate autonomous aerial refuelling between two Global Hawks, to help support up to one week endurance flights.