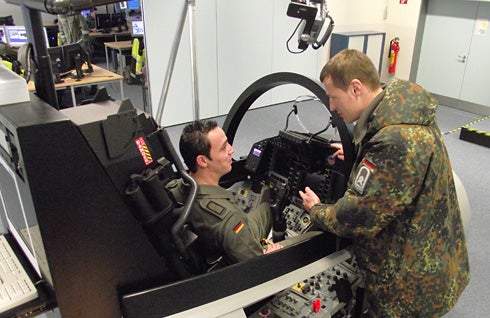 Cassidian has received a contract for the supply of a new maintenance system trainer (MST) for the German Air Force’s (Luftwaffe) Eurofighter Typhoon combat aircraft.

Awarded by the German Federal Office of Bundeswehr Equipment, Information Technology and In-Service Support (BAAINBw), the contract covers delivery of an MST to support the aircraft’s technical personnel training.

Additional responsibilities, as part of the contract, include upgrades of the air force’s existing training system to allow training at the current aircraft configuration.

The trainer will also help personnel understand complex systems knowledge, including correct procedure for detection, investigation and elimination of faults, and conduct testing.

A PC-based simulator from the company’s Virtual Maintenance Trainer product family, the MST is designed to function as an independent trainee workstation and also as part of a classroom network with 12 trainee stations and one trainer station.

In addition to simulating the functionality of a single-seater Eurofighter in the SRP 5.1, PSC 3.71 version in 3D surroundings, the trainer can also replicate a total of several hundred faults that can be remedied by trainees either on their own or under supervision.

The trainer also features an additional Eurofighter cockpit and real controls for supporting haptic training and efficiently reduces training time in the actual aircraft, while also reducing risks of damage to the aircraft or to trainees’ lives during training sorties.

The trainer is currently being manufactured with Luftwaffe’s School of Engineering No. 1 (TSLw 1) at the Military Air Systems Centre in Manching, Germany. It is scheduled to be delivered at the end of 2015.