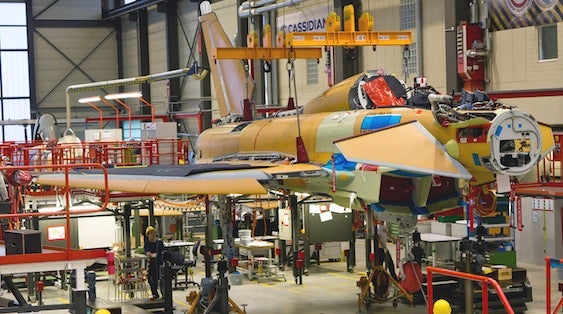 Besides mounting of the IPA 8 test aircraft’s right wing, the company has also connected the cockpit, vertical tail unit and wings with the fuselage.

The company is currently installing the aircraft’s hydraulic, defensive aids and electrical systems, as well as complex special cabling at the final assembly line in Manching.

More than 110km of cable have already been installed by the company’s engineers in the past few months, in addition to pressure, flow and electrical data sensors, computer and test flight instrumentation systems.

"The company is currently installing the aircraft’s hydraulic, defensive aids and electrical systems."

The installation enables all the relevant aircraft parameters to establish real-time communications from the air to flight test engineers on the ground.

IPA 8 aircraft is available to all four of the Eurofighter programme’s partner nations to evaluate new capabilities according to their developmental requirements.

Typhoon covers serial production of 559 aircraft in three tranches for the air forces of Austria, Italy, Germany, Saudi Arabia, Spain and the UK.