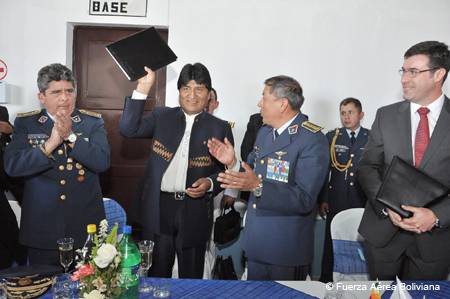 The Bolivian Air Force (FAB) has taken delivery of a EC145 light utility helicopter from Eurocopter.

The delivery forms part of a contract secured by Eurocopter in 2011 to supply two helicopters to help upgrade the air force’s transport aircraft fleet.

Eurocopter Cono Sur CEO, Alexandre Ceccacci, said Bolivia is the first country in its region to acquire and operate the EC145 helicopter.

"This purchase paves the way for the introduction in Bolivia of new twin-engine helicopters with greater capacity," Ceccacci added.

Scheduled to be used by the air force for VIP transportation, the helicopters will provide assistance during natural disasters, rescue missions, fire-fighting, medical evacuation (MEDEVAC) and parapublic operations.

The EC145 is a medium-size helicopter powered by two Turbomeca Arriel 1E2 turboshaft engines and designed to conduct passenger and corporate transport, emergency medical services (EMS), search and rescue, as well as police and public services and utility missions in challenging environments.

Derived from the MBB/Kawasaki BK 117 C1 helicopter, the EC145 is capable of carrying either eight passengers in a club seating configuration, or nine individuals in a high density seating arrangement.

The rotary-wing helicopter has a maximum cruise speed of 246kmph, and is equipped with a fully separated fuel system, a tandem hydraulic system, dual electrical system and redundant lubrication for the main transmission.

More than 500 helicopters have been delivered by the company to around 100 customers in 38 countries worldwide.

Eurocopter had also delivered Lama and Alouette helicopters to the Bolivian Air Force in 1970, which were subsequently replaced with the Ecureuil/Astar AS350 B3 light helicopter in 2009.