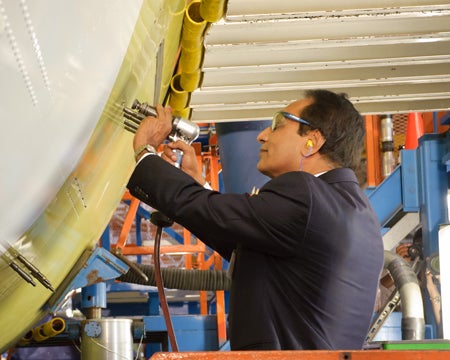 Boeing has completed fuselage integration and wing assembly of the Indian Air Force’s (IAF) first C-17 Globemaster III heavy-lift transport aircraft at its Long Beach manufacturing facility in the US.

The ‘major join’ ceremony saw the integration of forward, centre and aft fuselages into the airlifter. The work signifies an important step forward in production of the first of ten aircraft ordered by India under a $4.1bn contract in June 2011.

”As India strives to become a global reservoir of highly skilled and technologically sophisticated manpower, we will witness an escalating technology transfer, collaborative joint research and development, and co-production of defense items between our two countries," said Parthasarathi.

Bob Ciesla, Boeing Airlift vice president and C-17 programme manager, said: "We are preparing for India’s first C-17 to enter flight test on schedule early next year, and we look forward to providing for India’s current and future needs and continuing to support C-17s long after they are delivered.”

Delivery of all the ten aircraft is scheduled between 2013 and 2014 to the IAF, which is also expected to order an additional six aircraft before 2013.

Intended to replace IAF’s outdated Russian IL-76 airlifter fleet, the C-17s are expected to be operated in support of military and humanitarian airlift operations from Hindon airbase in New Delhi, India.

The aircraft is also operated by air forces in the US, Australia, UAE, Canada and Qatar.