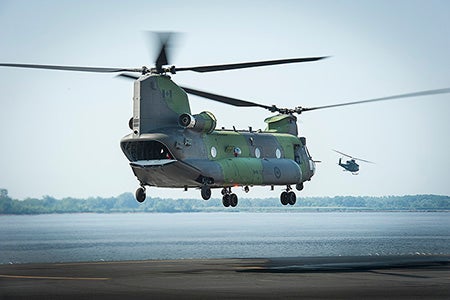 Boeing has handed over the first new CH-147F Chinook medium-to-heavy-lift helicopter (MHLH) to the Royal Canadian Air Force (RCAF) at its facility in Pennsylvania, US.

Accepted by the RCAF’s 450 Tactical Helicopter Squadron, the helicopter represents the first of 15 aircraft ordered by the Canadian Department of National Defence (DND), along with in-service support in June 2009.

Boeing Cargo Helicopters vice president Chuck Dabundo said: "Since receiving the contract in 2009, Boeing has executed the program on or ahead of schedule for every major milestone, including first flight and now the delivery of the first aircraft."

Canadian defence minister Peter MacKay added: "As initial crew training progresses, these new and much-improved Chinooks will certainly enhance the ability of the Canadian Armed Forces to conduct military operations wherever we are called to do so, including the rapid response to emergencies across Canada."

"Canadian industry will play a key role in our support for MHLH, building on what is already an incredibly successful partnership."

The company is also scheduled to supply in-service support to the MHLH fleet over the next 20 years under a separate performance-based logistics (PBL) programme, and has sub-contracted six local suppliers for the same.

Boeing Chinook Rotorcraft Support director Raymond Haddad said: "Canadian industry will play a key role in our support for MHLH, building on what is already an incredibly successful partnership."

The total cost for procurement and in-service support for the MHLH project is estimated to be C$5bn ($4.75bn).

Equipped with an advanced airframe with a long-range fuel system, upgraded electrical system, fully integrated common avionics architecture system cockpit, as well as digital automatic flight control system, the aircraft is primarily designed for the transport of equipment and personnel during both domestic and deployed operations.

Capable of providing a critical capability to respond to humanitarian emergencies, including fire, floods, and earthquakes, the helicopter also features a directional infrared countermeasures system for destruction of anti-aircraft missiles.

An additional six helicopters will be handed over this year, while all deliveries are set to complete by June 2014.