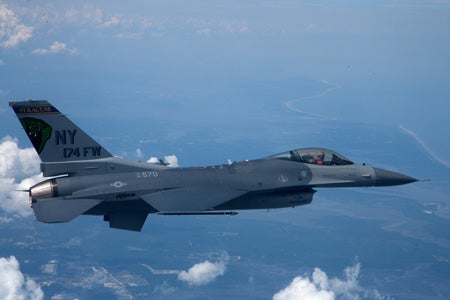 Boeing Global Maintenance and Upgrades vice president, Torbjorn Sjogren, said: "With this successful first flight of the QF-16, the USAF, Boeing and our supplier-partners have laid the groundwork for the programme to enter low-rate production in 2013 and make its first production delivery in 2014."

During the 66-minute flight, the QF-16 aircraft climbed to an altitude of 41,000ft and demonstrated the basic performance of the newly installed modification package.

The QF-16 modification package enables it to fly in an unmanned mode under the control of a ground-based control system, such as the Gulf Range Drone Control System (GRDCS) at Tyndall Air Force Base, Florida, US or the Drone Formation Control System (DFCS) at White Sands Missile Range (WSMR), New Mexico, US.

A GRDCS mobile trailer with portable transmission towers provided communications between the flight controller, personnel on the ground and the QF-16 pilot, during the trails.

In the first phase, Boeing, together with BAE Systems, will begin engineering, manufacturing and development of the full-scale manned and unmanned QF-16 aircraft.

The USAF will receive six QF-16 test aircraft for additional testing over the Gulf Range from Boeing in October 2012.

Boeing will support government flight testing from Holloman Air Force Base, New Mexico, US, following the completion of additional testing over the WSMR complex.

13 Jan 2021
Registration is disabled.
We use cookies to ensure that we give you the best experience on our website. If you continue to use this site we will assume that you are happy with it.Ok