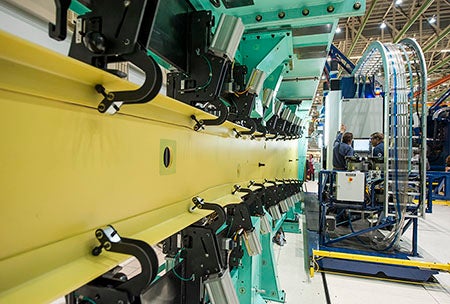 Boeing has started fabrication of the US Air Force’s (USAF) first KC-46A aerial refuelling tanker aircraft under contract at its facility in Everett, Washington, US.

The company has completed loading of the first wing spar, which serves as a main structural component of the wing by delivering critical support for flight loads and the weight of the wings when the aircraft is not operating.

Boeing vice president and KC-46 Tanker programme manager Maureen Dougherty said the company is building on the strong partnership that has been fostered with the air force in the past two years.

”From the enhanced flight deck to the modernised boom, our tanker will provide unequaled capabilities that will allow it to offload more fuel and carry more passengers, cargo and medical patients,” Dougherty added.

"Installation of military-unique systems and flight testing at Boeing facility in Seattle, US, will start in June 2014."

Representing the programme’s next major contractual milestone, the critical design review (CDR) is scheduled to begin next month.

Meanwhile, the company is currently preparing its 767 production facility for assembly of aft and forward body structures of the tanker, which will complete assembly and roll out of production line in November 2013 and January 2014 respectively.

Installation of military-unique systems and flight testing at Boeing facility in Seattle, US, will start in June 2014.

Initial test flight of the fully provisioned aircraft is scheduled for early 2015, followed by delivery in 2016.

Developed from Boeing’s 767-200ER, KC-46A is a military aerial refuelling and strategic transport aircraft, designed to replace the USAF’s ageing KC-135 Stratotankers fleet, which has served as its primary refuelling aircraft for more than 50 years.

Image: The first wing spar being loaded for the first USAF’s KC-46A tanker aircraft at Boeing’s facility in Everett, US. Photo courtesy of Boeing.