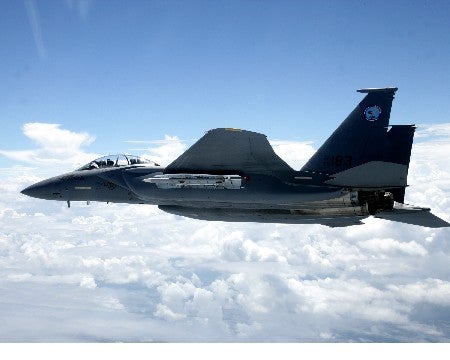 Boeing has advised the Republic of Korea Air Force (ROKAF) against the upgrade option of canted vertical tails for the F-15 Silent Eagle fighter aircraft, a senior military official has revealed.

The unidentified official was quoted by The Korea Times as saying that Boeing believes the canted vertical tails option would provide low cost-effectiveness for the ROKAF.

"Boeing argued that its test results show only a slight improvement through the modification of the tails," the official added.

Boeing had originally offered the F-15 SE jet along with two key characteristics, a twin canted vertical tails and conformal weapons bay, for the $7.9bn F-X III competition in March 2009.

The company had proposed to cant the tails 15 degrees outward in an effort to lower the fighter’s radar cross-section (RCS), which reflects a radar pulse back to the receiver, as well as to reduce weight and boost aerodynamic efficiency.

Earlier, a senior Boeing official said the company would propose canted vertical tails as an upgrade option, rather than as part of the package. Boeing also refuted claims that it had suspended the development of the new feature.

A Defense Acquisition Program Administration (DAPA) official refused to comment on Boeing’s offer, but confirmed that the company is seeking to restrict stealth options to the aircraft’s conformal weapons bay.

An upgraded variant of the F-15 Eagle, the F-15 SE is a dual-fighter aircraft featuring an active electronically scanned array radar and digital electronic warfare suite, to provide the aircrew with increased lethality and enhanced situational awareness.