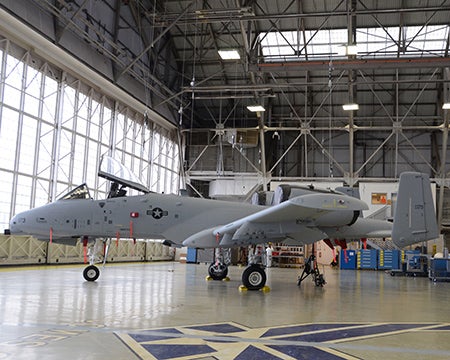 Boeing has delivered the US Air Force’s (USAF) first re-winged A-10 Thunderbolt II aircraft at Hill Air Force Base, Utah, US.

Boeing Defense, space and security maintenance, modifications and upgrades vice president and general manager, Mark Bass, said: "This enhanced wing assembly will provide the A-10 with renewed strength and foundation to continue in service up to 2040."

In June 2007, Boeing was awarded a $2bn contract under the A-10 wing replacement programme to supply 242 replacement wing sets by 2018.

The A-10 Thunderbolt II aircraft provides close-air support of ground forces and is used against all ground targets, including tanks and other armoured vehicles.

The first A-10 wing set was delivered to the Air Force by Boeing in March 2011, following which the Air Force pilots flew the aircraft on its first flight after validation and verification of the wing in November 2011.

The Boeing-built A-10 Thunderbolt aircraft is also known as the Warthog and has been designed to support Operation Desert Storm, Nato operations in response to the Kosovo crisis, Operation Enduring Freedom in Afghanistan and in Operation Iraqi Freedom.

The high-survivability and versatile A-10 aircraft provides short take-off and landing capability allows for operation from forward air bases, and the aircraft is capable of conducting missions during darkness using night vision goggles.

The A-10 is capable of carrying six Maverick AGM-65/B/D/G/H/K air-to-surface missiles and up to four AIM-9 Sidewinder air-to-air missiles.

Boeing has developed the wing sets in partnership with Korean Aerospace Industries at the company’s production facility in Macon, Georgia, US.