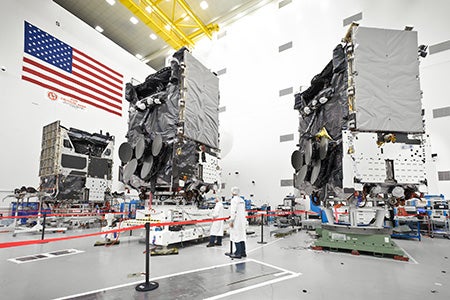 Boeing has been awarded a contract modification for the production and launch of the US Air Force’s (USAF) tenth Wideband Global SATCOM (WGS) satellite.

As part of a contract received in June 2012, Boeing is currently implementing an enhanced Wideband Digital Channelizer upgrade on the WGS-8 to help the USAF achieve a 90% improvement in satellite bandwidth, with no additional cost to the government.

"We are continuously looking for ways to realise cost savings on the WGS programme, whether through product upgrades or improvements in the acquisition process," Cooning added.

"Boeing is currently implementing an enhanced Wideband Digital Channelizer upgrade on the WGS-8 to help the USAF achieve a 90% improvement in satellite bandwidth."

The company said that it will continue to work with the air force to develop WGS enhancements that are capable of unlocking additional bandwidth and capacity.

Developed from the Boeing 702HP platform, the WGS satellites are designed to provide fast, flexible broadband communications for US warfighters and their allies worldwide.

Cooning said: "The Block I satellites, which are meeting or exceeding all mission requirements, provide unique capabilities, such as on-station reconfigurable X-band coverage and X/Ka cross-banding, which enable communication in contested theatres around the globe."

Image: The first WGS satellites in the Block II series include WGS-4, WGS-5 and WGS-6. Photo: courtesy of Boeing.