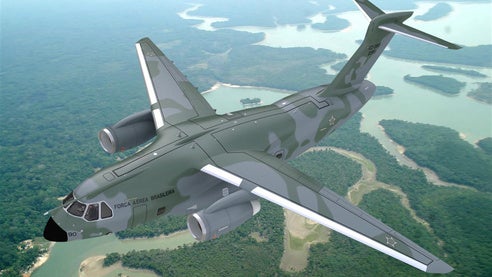 The contract forms part of an agreement signed by the company to provide the flight control electronics and active side sticks for the KC-390 aircraft, which is currently being manufactured by Embraer.

"It will entail software development training and maintenance, repair and overhaul services for the KC-390 flight control system that will be performed in Brazil,” Siddiqui said.

BAE Systems Brazil general manager Jim Reid said the company is committed to working closely with both FAB and the local industry.

"This agreement is further evidence of this intent and comes on the back of our final OPV delivery to the Brazilian Navy and ongoing partnership with the Brazilian Army upgrading its M113 fleet," Reid said.

"Apart from system deliveries, BAE has also proposed performing some final assembly work for its KC-390 products in the country."

Brazilian Air Force KC-390 program commission in charge COPAC president brigadier-general Crepaldi said BAE will ”be an important partner in providing technological solutions in Brazil to support the development and future operation of the KC-390 fleet."

Apart from system deliveries, BAE has also proposed performing some final assembly work for its KC-390 products in the country.

Around 28 KC-390s are being manufactured by Embraer as part of a $1.3bn contract awarded by FAB in April 2009, for replacement of its existing Lockheed Martin-built C-130E/Hs and KC-130 aircraft fleet.

The initial test flight of the aircraft is expected to take place in 2014, while entry into operational service is planned for 2016.

The KC-390 is a medium-lift aircraft designed to conduct troop and cargo transport in the Antarctic and Amazon regions, as well as aerial delivery, in-flight refuelling, search-and-rescue (SAR) and medical evacuation (MEDEVAC) operations.

Image: An impression of the Brazilian Air Force’s KC-390 aircraft during its flight. Photo: courtesy of BAE Systems.