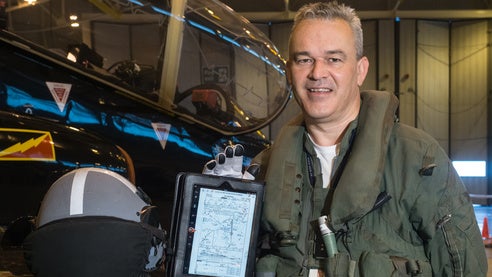 The training pilots would earlier view the information on reference cards and maps kept in their flight suit pockets.

Four tablets have been already delivered to the South African Air Force (SAAF) for testing last month, after completion of a comprehensive evaluation programme, which included trials against rapid decompression and analysed system interference from an electromagnetic compatibility perspective.

Hawk Product Development Engineering head Lee Franks said the tablet integration represents the latest in a long line of developments for Hawk that are focused on making the aircraft the best for the customers.

View All
"They are an additional resource available to the pilot, they do not replace anything, only add to a truly world-class aircraft."

”Now we have handed over the first of these tablets, we want the South African Air Force to try them out; part of the beauty of them is they can be tailored to carry whatever information is needed by each customer,” Franks said. ”They are an additional resource available to the pilot, they do not replace anything, only add to a truly world-class aircraft.” Additionally, the tablets’ compass effects were validated prior to hand-over to SAAF. In addition to tablets, the company also manufactured six sets of gloves to help the pilots use the computers. Franks added, ”Their traditional flying gloves were not suitable, so we immediately looked in to what was available on the market and then tailored the gloves to what would be needed by pilots.” BAE is now manufacturing more tablets for trial by the UK Royal Air Force (RAF), the Indian Air Force (IAF) and the Royal Australian Air Force (RAAF), which are among the 18 countries to have acquired the aircraft.