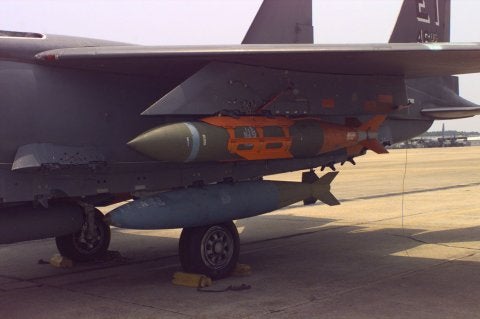 Alliant Tech Systems (ATK) has received an initial contract for first article testing and development of the FMU-143 bomb fuse for the US Air Force (USAF) and Navy.

Awarded by the US Army’s Contracting Center, the $52m initial order forms part of an indefinite delivery/indefinite quantity (IDIQ) contract, which has a maximum ceiling of $84m.

As a prime contractor, ATK will partner with L-3 Fuzing and Ordnance Systems (FOS) to develop the FMU-143 fuse for hard target applications.

"The FMU-143 is the only qualified production fuze for use in today’s hard target defeat weapon systems,” Fine said.

ATK Missile Products Division vice president and general manager Cary Ralston said the company will partner with its team-mate and customers to deliver the critical capability to US Armed Forces.

The FMU-143 is a high-velocity fuse mounted on the BLU-109 and BLU-113-hardened penetrating bombs for destruction of concrete and deeply buried enemy targets.

Equipped with a delayed-action tail-fuse, the bunker busters remain intact upon impact and can penetrate deep inside strong reinforced sites and structures to enable FMU-143 to cause a delayed detonation leading to a comprehensive destruction.

Development and testing of the FMU-143 fuse is scheduled to take place at L-3 FOS’ facility in Cincinnati, and the Allegany Ballistics Laboratory (ABL) facility, which is a US Navy-owned, ATK-operated facility in Rocket Center, West Virginia, US.

Image: A BLU-109 bomb mounted under the wing of an F-15E Strike Eagle aircraft. Photo: Courtesy of Avriette.