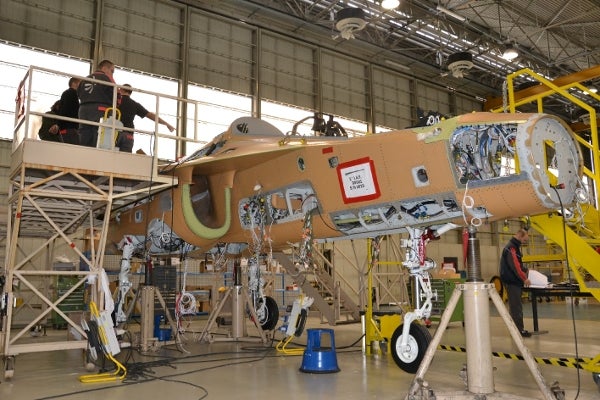 The first aircraft is scheduled to be rolled out of the factory for final checks and delivery to IAF in mid-2014.

A total of 30 M-346 trainers were ordered by the Israeli Ministry of Defence (MoD) from Alenia under a $1bn government-to-government deal in July 2012.

The contract also included the supply of engines, maintenance, logistics, simulators and training support, in collaboration with other Israeli and foreign companies.

Scheduled to be called ‘Lavi’ in IAF service, the aircraft will replace the air force’s ageing American Douglas TA-4 Skyhawks fleet, which served as the training apparatus for more than 40 years.

Based on the Russian Yak-130 combat trainer, the M-346 Master is a military transonic trainer aircraft designed to offer combat pilot training for frontline fighters with high angle-of-attack capability.

Powered by two Honeywell F124 engines, the lead-in fifth-generation fighter features a fly-by-wire control system to enable the aircraft to remain fully controllable at angles of attack of more than 35°, and an integrated digital avionics suite with an ability to simulate sensors and threats in flight.

The aircraft’s avionics are based on those used in current fighters, including the F-16, F-18 and other new-generation aircraft, such as Typhoon, Gripen, Rafale, F-22 and the F-35 joint strike fighter (JSF).

The aircraft has also been ordered by the Republic of Singapore Air Forces (RSAF).