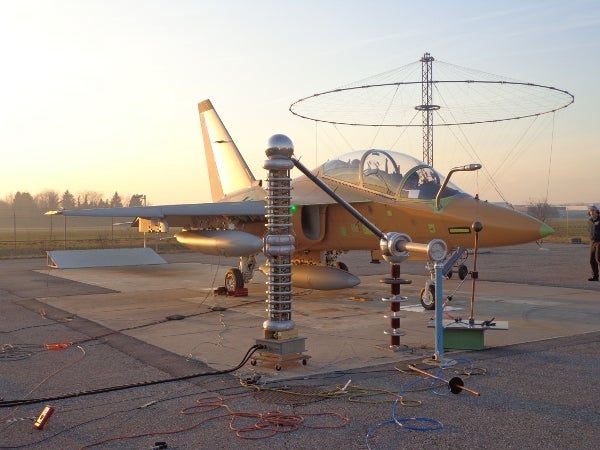 Carried out with external support from the Cobham Laboratory, the testing demonstrated that the aircraft’s electronic systems did not suffer any damage or malfunctions and also found no sparking inside the aircraft’s tanks due to ESD occurrence.

A ready-for-flight M-346 aircraft with all operative systems and running engines was used during the testing to validate proper behaviour of all systems, with a specific focus on the safety of critical systems.

The successful testing provides the aircraft with clearance for air-to-air refuelling missions in a series configuration with external tanks installed, and represents a new milestone towards the full trainer certification process.

ESD is likely to occur as a result of accumulations of electrostatic charges as high as more than 100,000V between the tanker basket and receiving aircraft’s refuelling probe during air-to-air refuelling operations.

"A ready-for-flight M-346 aircraft with all operative systems and running engines was used during the testing."

A derivative of the Russian Yak-130 combat trainer, the military transonic aircraft features a full authority quadruplex fly-by-wire control system, to remain fully controllable at angles of attack of more than 35°, as well as an integrated digital avionics suite with an ability to simulate sensors and threats in flight.