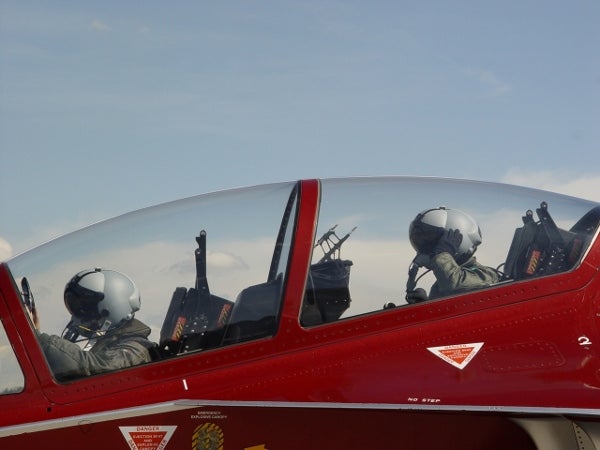 Alenia Aermacchi has fitted its M-346 Master advanced trainer aircraft with a fully integrated helmet mounted display (HMD) system to make it even more representative of the operational aircraft.

Installed into the aircraft’s avionics systems and ground-based mission simulators, the HMD is designed to help pilots develop competency in use of advanced weapons systems management in scenarios fully representative of combat aircraft, by serving as a true interface between the pilot and aircraft systems.

The easy-to-use and maintain system can particularly prove effective in scenarios where the trainee uses the embedded tactical training system (ETTS) for sensor and weapons systems training by enhancing the pilot’s situational awareness both in air-to-air and air-to-ground missions.

Besides enabling reconfiguration of navigation and tactical symbology for replication of various operational aircraft systems, the system also displays targeting and tracking information on the helmet visor to help trainees perform tactical manoeuvres and weapon release to achieve mission objectives.

Fitted with a click-on night module, the M-346 HMD facilitates easy mechanical integration with most of the common night-vision goggle (NVGs) models, and is also expected to prove useful for the back seat crew training.

The system successfully completed flight testing in May 2010.

A derivative of the Russian Yak-130 combat trainer, the aircraft features a full authority quadruplex fly-by-wire control system to remain fully controllable at angles of attack of more than 35°, as well as an integrated digital avionics suite with an ability to simulate sensors and threats in flight.