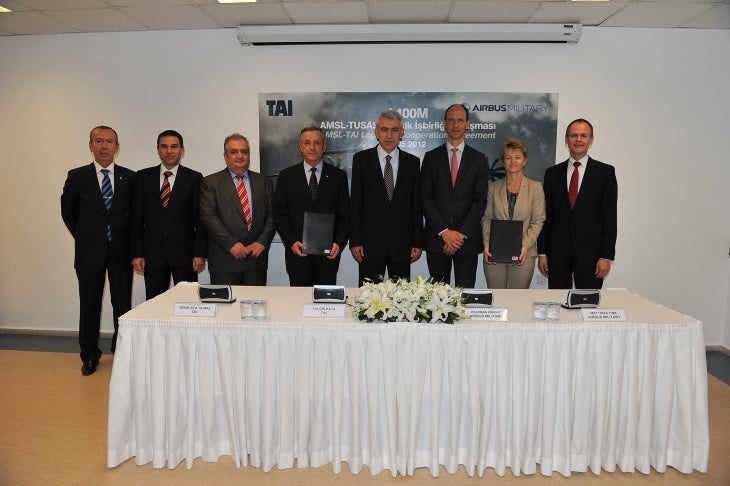 Airbus Military and Turkish Aerospace Industries (TAI) have signed a memorandum of understanding (MoU) to set up a joint company, which will offer in-service support (ISS) services for the A400M aircraft fleet ordered by the Turkish Air Force (TuAF).

Airbus Military CEO, Domingo Ureña Raso, said the MoU establish a strong in-country footprint to ensure a smooth entry into service and comprehensive support for the operation of the fleet:"We are now looking forward to the next steps for concluding the provision of the ISS to Turkey and to further broaden our links with the Turkish aerospace industry."

TAI chairman Yalçin Kaya said the TAI-AMSL partnership is focussed at offering cost-effective logistic solution to Turkish Air Force, followed by potential customers in the region: "We have started working on A400M in 2003 as a partner in AMSL, having important design and manufacturing responsibilities. Design phase of the aircraft is almost completed and serial production started. Now it is time to continue our support in the sustainment phase of the programme."

As the industrial partner of the A400M programme in Turkey, TAI produces a range of airframe and aircraft systems, including the forward centre fuselage, rear fuselage components, ailerons, spoilers, lights and water/waste systems, which are then delivered to Airbus Military’s facility in Spain for assembly.

The TuAF has placed orders for ten A400M aircraft to help meet its cargo transport requirements in May 2003, and is expected to take delivery of the first aircraft in 2013.

In addition to Turkey, a total of 174 aircraft have been ordered by Belgium, France, Germany, Luxembourg, Spain and the UK.

Image: Airbus Military and TAI’s officials during the signing of MoU. Photo: courtesy of TAI.