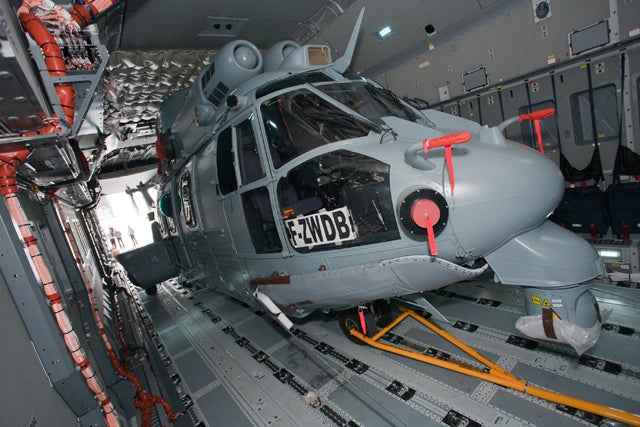 Airbus Military has successfully demonstrated the cargo carrying capabilities of the A400M military transport aircraft during a series of field tests at Holzdorf air base in Germany and in Toulouse, France.

During the tests, which were conducted last month, Eurocopter EC725 and NH Industries-built NH90 helicopters were loaded onto, and unloaded from the Grizzly 4 development aircraft.

The Airbus Military trials mark the first time the aircraft’s cargo-carrying capabilities have been tested using other aircraft.

The loading trials will be followed by further exercises, which focus on demonstrating the aircraft’s ability to carry a wider range of military equipment.

The aircraft is capable of landing on makeshift runways and can also be configured to perform long-range cargo and troop transport, medical evacuation, aerial refuelling and electronic surveillance operations.

With a lifting capacity of up to 30t, the airlifter can either carry an NH90 or CH-47 Chinook helicopter, or two heavy armoured vehicles for military purposes, as well as a heavy logistic truck. The airlifter is also capable of carrying rescue boats and large lifting devices.

Around 174 aircraft have been ordered by seven Nato nations including; Belgium, France, Germany, Luxembourg, Spain, Turkey and the UK.

The French Air Force (ALA) is scheduled to take delivery of the first aircraft by the end of 2012.