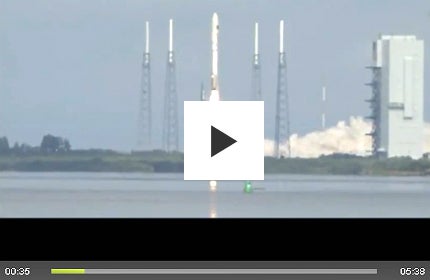 Shaped almost exactly like Nasa’s former Space Shuttle and approximately a quarter of the size, the US Air Force’s Boeing-built X-37B appears almost unassuming sitting on the tarmac. Beneath its modest size and familiar design, however, lies one of the US military’s most contentious projects.

Built by Boeing’s Phantom Works, the vehicle once belonged to Nasa but now finds itself in US Air Force hangars, with the X-37 launching for a third time in December 2012.

The two previous missions involving X-37 spacecraft have lasted 224 and 469 days respectively, triggering intense suspicion and speculation regarding the purpose of such lengthy stays in space.

"Built by Boeing’s Phantom Works, the vehicle once belonged to Nasa but now finds itself in US Air Force hangars."

Despite the USAF’s assertions that the X-37 is merely an "experimental test programme to demonstrate technologies for a reliable, reusable, unmanned space test platform," a long list of sceptics have asserted that the true purpose of the USAF’s X-37 programme is something more sinister than a mere space-bound science lab.

One recurring theory is that the spacecraft marks the US military’s first steps towards the weaponisation of space, with the X-37 representing a prototype of a future vehicle capable of launching projectiles at enemy targets from orbit.

The advantages of such a capability would certainly endear themselves to the US, most notably aligning itself with future long-range strike objectives to hit a target anywhere in the world within one hour; however, it is a considerable leap to suggest that the X-37 is a precursor to such technology.

Although accusations of weaponisation have so far been confined to internet message boards and conspiracy theorists, a more serious and altogether more believable assertion has emanated from China.

"One recurring theory is that the spacecraft marks the US military’s first steps towards the weaponisation of space."

Chinese authorities have taken a dim view on the US Air Force’s continual experimentation with the platform, suggesting that the X-37 could be used to conduct surveillance on China’s own satellites and the nation’s Tiangong-1 space laboratory, as well as monitoring North Korean efforts to launch a satellite into orbit.

The benefits of such a vehicle could be unparalleled. Advanced spy satellites do currently exist, but are not flexible in their capabilities and cannot adjust their position or orbit as quickly or spontaneously as the X-37 spacecraft can. If the X-37 is indeed a prototype, it is significantly more likely that it is a prototype spy spacecraft than one capable of launching a missile strike.

A far more novel theory suggested by some quarters is that the X-37 itself may have proved its purpose some time ago, and that the US Air Force has continued to persevere with the programme as a means of providing something of a wild goose chase to preoccupy China and other nations. Given the costs involved, such a meaningless expense is hard to fathom, but it may not be beyond a military engaged in warfare as much psychological as physical.

As reports emerge of a Chinese rival, Shenlong, Boeing recently successfully returned one of two unmanned US Air Force X-37B Orbital Test Vehicles (OTV) to orbit, demonstrating the reusability of the platform.