Iran’s perseverance with its contentious nuclear programme has sparked a seemingly endless debate. Whether Iran’s intentions are for the creation of sustainable energy or for nuclear weaponry, the nation’s belligerence is undoubtedly a cause for concern for the United Nations. As the notion of a peaceful conclusion fades, a pre-emptive strike conducted by the US Air Force is becoming increasingly likely.

Formulating a precise plan of attack to neutralise Iran’s sites requires capabilities that only the US Air Force currently has. As the report dictates: "The US would be the only country that has the air power, support capability, and mix of sea-air forces in the Gulf to continue a sustained campaign over a period of time and restrike [if] after an initial battle damage assessment it is found that further strike sorties are required."

B-2 bombers could used for initial raids 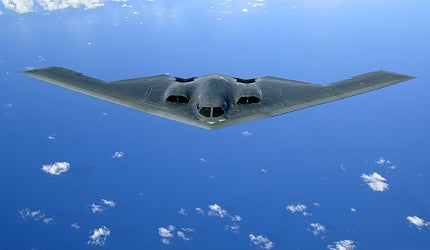 A B-2 Spirit soars after a refuelling mission over the Pacific Ocean. Image courtesy of the US Air Force.

"Formulating a precise plan of attack to neutralise Iran’s sites requires capabilities that only the US Air Force currently has."

Any formulated plan to attack Iranian sites would need to be comprehensive and detailed, taking into account the limited capabilities of allied nations in the area, prioritising key targets over others and matching them against the capabilities of the US Air Force.

It is not just a simple case of flying bomber aircraft in and out of Iran, rather requiring a complicated offensive air strike involving various aircraft to fulfil differing roles. Combat aircraft will be required to suppress enemy air defences and escort aircraft, as well as support electronic warfare aircraft capable of jamming enemy radar and communications and assist with air-to-air refuelling aircraft.

The US Air Force is most likely to deploy its B-2 Spirit Stealth Bombers, to be escorted by F-18, F-15E or F-16C combat aircraft throughout the mission. The B-2 bombers can deliver a payload of 40,000lb while travelling a maximum range of 6,000nmi. The aircraft’s service ceiling is 50,000ft, and its maximum cruise speed is 0.85M.

The US currently has F-18s stationed in the area as part of its 5th Fleet, however F-15Es and F-16Cs could be deployed from forward area air bases in support. 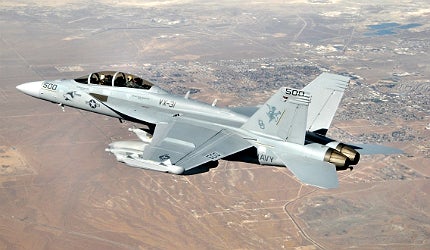 A US Navy Boeing EA-18G Growler at the conclusion of a test mission on the Electronic Combat Range (Echo). Image courtesy of the US Navy.

While combat aircraft and bombers will be used to carry out the destructive attacks, they will require assistance from other aircraft in order to effectively engage Iranian defences and to stand the best chance of success.

Jamming enemy communications would provide a huge operational advantage to US forces. This could see the deployment of the EA-18G Growler, with the aircraft having previously been used during Operation Odyssey Dawn to enforce the no-fly zone over Libya.

"Combat aircraft will be required to suppress enemy air defences and escort aircraft."

Other aircraft that could be used to support the attack would be a tanker, used primarily for the air-to-air refuelling of other aircraft when conducting longer raids. A B-2 Spirit Stealth Bomber has a range of approximately 6,000nmi, but this could be extended through refuelling missions.

The US Air Force currently has two such tanker aircraft in its inventory, the KC-10 Extender air-to-air refuelling tanker aircraft, which was used extensively throughout Operation Enduring Freedom and Iraqi Freedom, and the KC-135 Stratotanker, which has been in service since 1957. 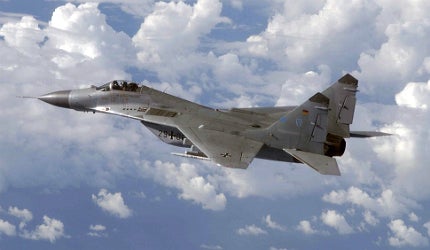 A Soviet-built MiG-29 Fulcrum fighter flies over the Gulf of Mexico during a live-fire training exercise. Image courtesy of the US Air Force.

Iran’s Air Force is ageing and would pose little opposition to the vastly more advanced US combat aircraft. The nation’s most advanced fighters are export version of the Russian-built Su-24 and MiG-29 aircraft; however the nation’s inventory is said to be limited. Iran is thought to possess fewer than 30 MiG-29s, with some not currently operational.

Iran has, however, claimed to have modernised the avionics onboard its three P-3F Orion maritime patrol aircraft, currently the closest thing the Iranian Air Force has to an AWACs aircraft.

In the event of an attack, Iran could still cause considerable damage to GCC states by launching ballistic missiles from surviving sites. Technology will need to be in place to defend them against such an attack, and the US is currently involved in building a missile shield.

"Ballistic missile defence systems have been provided to Kuwait, the United Arab Emirates, Qatar and Oman."

The THAAD missile system is easily transportable and capable of protecting against incoming ballistic missiles at ranges of 200km and at altitudes of up to 150km. It provides the upper tier of a layered defensive shield, intercepting exo-atmospheric and endo-atmospheric threats. The US Army is expected to acquire between 80 and 99 THAAD launchers, while the UAE requested three THAAD fire units in September 2008.

The new PAC-3 missile has improved effectiveness against tactical ballistic and cruise missiles using advanced hit-to-kill technology, and forms the lower tier of a layered defensive shield, complementing the defence offered by the THAAD system. It is traditionally used to target missiles at altitudes 20 to 100 times lower than the THAAD system.

Ballistic missile defence systems have been provided to Kuwait, the United Arab Emirates, Qatar and Oman, while Aegis-equipped warships will be stationed in the Arabian Gulf. An integrated early warning radar system is also being developed in collaboration with GCC states, enabling them to quickly respond to any such missile attack.

Northrop Grumman is the prime contractor for the US Air Force B-2 Spirit stealth bomber.

The EA-18G Growler is an airborne electronic attack (AEA) aircraft which operates from either an aircraft carrier or from land-bases.

The MiG-29K fighter bomber aircraft is manufactured by RSK MiG and the Irkutsk Aircraft Production Association Joint Stock Company. The MiG-29, 30 and 33 are known by the Nato code name Fulcrum.

The THAAD terminal (formerly theatre) high-altitude area defence missile system is an easily transportable defensive weapon system to protect against hostile incoming threats such as tactical and theatre ballistic missiles at ranges of 200km and at altitudes up to 150km.

The Future of Disruptive Tech Themes in Defense

The Military Satellite Market in Iran to 2024: Market Brief

The Electronic Warfare Market in Saudi Arabia to 2025: Market Brief

The Police Modernization and Counter Terrorism Market in Saudi Arabia to 2024: Market Brief