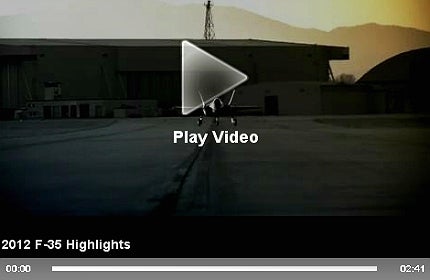 Against a pumping soundtrack worthy of an action movie, Lockheed shows its F-35 in the air and landing on aircraft carriers, bristling with high-tech sensors and weapons systems, interspersed with endorsements by the likes of US Defense Secretary Leon Panetta and Air Force Chief of Staff Gen. Mark A Welsh III.

Scanning across a seemingly-endless production line of jet after jet buzzing with industrious workers, it appears countless stealth fighters are rolling off the production line into the welcoming arms of international militaries with their credit cards ready. However, the reality is that the order book has been beset with delays, cancellations, technical hitches and soaring costs.

"Turkey’s defence procurement body SSM said that the aircraft’s technical capabilities were "not at the desired level yet"."

JSF consortium member Turkey caused Lockheed a New Year hangover by announcing in January that it was delaying the purchase of its first two F-35s due to technical problems and rising costs.

Turkey’s defence procurement body SSM said that the aircraft’s technical capabilities were "not at the desired level yet", but it still intends to purchase 100 units in the long run to replace its fleet of ageing F-4 Phantoms and F-16 Falcons.

The UK has already cut its orders for the jump-jet F-35B variant to 48, from the original order of 138. The British Government was roundly criticised in 2012 for switching tacks from 2010 plans to purchase the F-35 C model after the cost of fitting catapults and arrestor gear – "cats and traps" – to the Queen Elizabeth Class aircraft carriers spiralled.

Other partner countries are also getting cold feet: Italy reduced its planned purchase from 131 to 90 and Canada has pulled out of a deal to buy 65 F-35s because of concerns that the aircraft may be too expensive to run.

Adding to order-book and capability woes, production has floundered after it was revealed in a recent Pentagon report that the jet, also known as the Lightning II, ironically can’t be flown in thunderstorms as a lightning strike could cause the fuel tank to explode. It has been forbidden to fly in thunderstorms until engineers redesign an oxygen gauge in the fuel tank.

There are also problems with the helmet-mounted augmented-reality display that enables a pilot to "see through" his aircraft. Vibrations cause a blurred display, its night vision does not meet specifications, cockpit light makes it hard to see through the visor in low light and there have been problems with image latency.

Despite these problems, Lockheed remains bullish about its 2012 programme successes in its video. Footage from the utility evaluation conducted at Elgin Air Force Base shows the F-35 outfitted with its high-tech sensors and weapons, all readily tucked away into the airframe to maintain maximum stealth, and the company boasts of a 65 day schedule completed in 47 days.

"Lightning II ironically can’t be flown in thunderstorms as a lightning strike could cause the fuel tank to explode."

2012 also saw the first F-35 delivery to an operational Marine Corps base, and the first international delivery, which was to the UK. After a total of 2,106 flights addressing 9,200 test points, the F-35 demonstrated air-to-air refuelling, its high angle of attack, F-35 A and B in-flight weapons testing, night flights, air starts and fly-in hook arrestment.

"The future is flying now," concludes Lockheed, but that future may not be so rosy.

Last week Lockheed reported a 17% drop in fourth-quarter earnings for 2012, compared with the same quarter in 2011, and the market responded with a three percent drop in share value. With programme costs soaring to $400bn and the Pentagon eyeing further defence budget cuts, Lockheed needs to bolster its quality gates and drive down costs to keep its partners on board.

The company certainly has its work cut out before it should be looking to seduce new markets with any more blockbuster videos.

As mysterious as it is controversial, the US Air Force’s X-37 has captivated everyone from amateur astronomers to international governments.