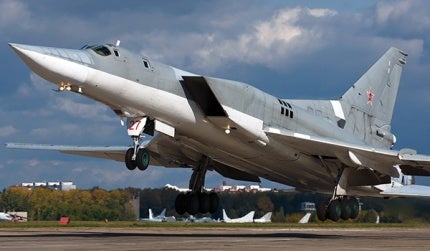 The Tupolev Tu-22M (also known as Backfire) is a long-range strategic and maritime strike bomber developed by Tupolev for the Soviet Air Force. The aircraft is currently in service with the Russian Air Force and Russian Naval Aviation.

The aircraft is primarily used to conduct nuclear strike and conventional attack operations. It can also be deployed in anti-ship and maritime reconnaissance missions.

"The aircraft is primarily used to conduct nuclear strike and conventional attack operations."

Production on the first major production version, Tu-22M2 began in 1972. It was equipped with extended wings and a redesigned fuselage, twin engines and a new undercarriage.

The Tu-22M3 was introduced with upgraded features to overcome the shortfalls of its predecessor. The aircraft completed its first flight in June 1977 and was inducted into the inventory in 1983. Some of the Tu-22Ms were also modified to Tu-22MR and Tu-22ME standard.

The Tupolev Tu-22M incorporates a long variable sweep wing fuselage design. The aircraft features a stepped cockpit and variable-geometry outer wing panels. The tail fin is swept-back and tapered with a square tip. The flats mounted on the centre of body are pointed with blunt tips and each wing includes a centre section and two outer panels. The outer wings are attached to the centre section through hinged joints.

The Tu-160 supersonic strategic bomber (NATO reporting name of Blackjack) was manufactured by the Tupolev aircraft research and engineering complex joint stock company of Moscow and the Kazan-Gorbunov Aircraft Production Association in Tatarstan from 1980 to 1992.

The semi-glass cockpit accommodates a crew of four on upward-firing ejection seats. It is equipped with dedicated panels for pilots, navigator-operator and commander, with entry provided through individual doors. The pressurised cockpit is equipped with climate control systems.

The aircraft is provided with hard points to carry Kh-22 stand-off missiles, Kh-15 nuclear or Kh-15P anti-radar missiles and FAB-250 or FAB-1500 free fall bombs. The wing and fuselage pylons and internal weapons bay are provided with a capacity to carry 24,000kg of weapons payload. The aircraft is also armed with a double-barrelled GSH-23 (23mm) gun in remotely controlled tail turret.

"The aircraft is equipped with tricycle landing gear to support operations on unprepared runways."

The Tu-22M3 is powered by two Kuznetsov NK-25 turbofan engines installed in the body with large air intakes and dual exhausts. Each engine produces a maximum thrust of 25,000kg and delivers an improved fuel economy.

The aircraft is equipped with tricycle landing gear to support operations on unprepared runways. The nose gear includes backward retractable twin wheels. Each main landing gear unit consists of six wheels in a 2×3 bogie arrangement. These are retracted straight in to the fuselage. The Tu-22M2 was equipped with twin brake slides and a runway arresting hook.

Performance of the Tu-22M3

The aircraft can be equipped with refuelling probes to allow in-flight refuelling for extended range.