Expand
The Tracker UAS was selected by the Austrian Armed Forces.
The Tracker UAS is powered by two low-noise electric engines.
Cassidian displayed the DRAC UAS, derived from the Tracker system, at Defence services Asia (DSA) in Malaysia. 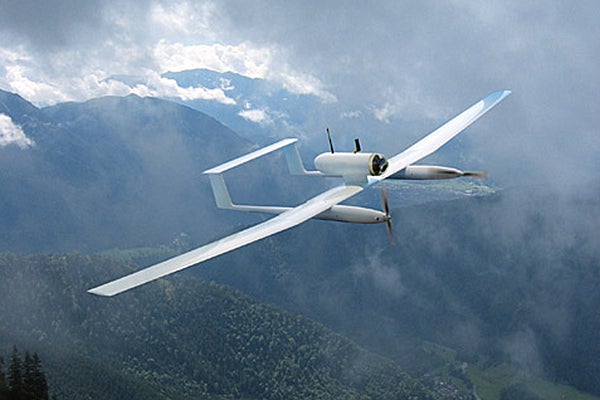 Tracker is a short-range mini unmanned aerial system (UAS) designed to deliver intelligence capabilities for defence forces. The UAS was developed by Cassidian Air Systems, an EADS company, in partnership with its wholly-owned subsidiary Survey Copter.

The aerial vehicle was presented at the CANSEC defence tradeshow in Ottawa, Canada, in May 2011. The system was also exhibited during the Paris International Air Show in June 2013.

Design and features of Tracker UAS

The Tracker UAS consists of an aircraft and a ground control station. The hand-launched tactical aerial system is capable of executing training and operational missions in flat terrain, mountainous areas or urban environments in both hot and cold climatic conditions. It can be easily operated by a two persons and can be carried as a backpack.

The unmanned air vehicle has a maximum take-off weight of 8.5kg and can carry a payload of 1kg. It has a wingspan of 3.6m and fuselage length of 1.4m.

The system is fitted with an advanced ergonomic man-machine interface (MMI) and other safety systems. Rechargeable lithium polymer batteries are incorporated in the UAS to provide back-up power.

Drone de Renseignement Au Contact (DRAC) is a mini unmanned aerial system designed based on the Tracker UAS. DRAC was developed by a partnership between Cassidian Air Systems and Survey Copter. The variant consists of two unmanned aerial vehicles, a ground station and an antenna tracking system.

In January 2005, the French defence procurement agency (DGA) awarded a contract to EADS Defence and Communications Systems to deliver 160 DRAC systems for the French Army.

DRAC has been in service with the French Army in Afghanistan since October 2010. The DGA placed an order for an additional 100 air vehicles in April 2011.

Payloads attached to the Tracker UAS

The fully-automatic Tracker UAS is equipped with high definition payloads to provide improved situational awareness and reconnaissance. It is fitted with a three axis interchangeable gyro stabilised plug and play T120 turret developed by Survey Copter.

The turret is integrated with visible-light and infrared cameras to capture high resolution imagery and video. An inertial measurement unit (IMU) navigation system is also integrated with the UAS to provide the details of flight path. The global positioning system (GPS) in the UAS provides autonomous guidance.

"The Tracker UAS is powered by two low-noise electric engines."

A secured data link antenna is fitted to the drone to track the position of the UAS and transmit the captured real time information to the ground control station, which is equipped with two personal computers (PCs) and control units with joysticks.

The Tracker UAS is powered by two low-noise electric engines. The mini aerial vehicle can fly at a speed ranging from 60km/h to 100km/h. The operational wind resistance of the UAS is up to 15m/s.

The UAS can operate at an altitude ranging from 100m to 600m above the ground level. Its maximum operating altitude above mean sea level is 3,000m. It has a range of about 10km and can endure for more than 90 minutes.