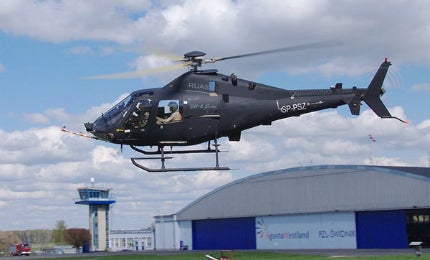 The helicopter provides armed forces with flexible operational capabilities in both unmanned and piloted configurations.

The SW-4 Solo RUAS / OPH prototype was unveiled at the 20th International Defence Industry Exhibition MSPO held in Kielce, Poland, in September 2012. The helicopter was also showcased at the MSPO 2014 exhibition.

In unmanned configuration, the SW-4 Solo can perform a range of missions including intelligence, aerial reconnaissance, surveillance of sea areas, borders and battlefield, target acquisition, and homeland security, as well as environmental monitoring, and disaster / battle damage assessment, cargo re-supply, and ground survey and mapping.

PZL-Świdnik announced the completion of SW-4 Solo’s successful demonstration in piloted configuration to the Italian Ministry of Defence (MoD) in July 2014.

This demonstration is part of a research and development contract signed with the MoD’s Directorate for Air Armaments under the Italian National Military Research Plan.

The development phase and flight trials were conducted from September 2013 to May 2014 in Poland and Italy. Tests included system monitoring, hands-off and remote-controlled flights, and hovering activities.

The SW-4 Solo rotorcraft is based on the SW-4 Puszczyk light, multi-role utility helicopter. It features a three-blade main rotor and a two-blade tail rotor. It can accommodate one pilot plus up to four personnel in crash-worthy seats. Its spacious cockpit is fitted with two doors to provide easy entry and exit for the operators.

The helicopter can be configured with a variety of mission equipment and weaponry. It has auto take-off and landing capability and can be operated from different platforms in land and maritime environments.

The SW-4 Solo RUAS / OPH is equipped with an integrated flight management system (FMS) to automate in-flight tasks, and a flight control system (FCS) to control the direction of the helicopter during the flight. A digital autopilot fully integrated with a precision navigation system is installed to control the flight path.

Also featured on the rotary-winged UAS is an all-weather SELEX Galileo PicoSAR active electronically scanned array (AESA) surveillance radar for the detection of moving objects over a range of 20km.

The GS410 is stabilised in four axes and offers 360° coverage.

The flights and payloads of SW-4 Solo unmanned configuration are controlled from a ground control station (GCS). Its operator / pilot can access the flight and status information through a system of multiple windows and bookmarks.

"The SW-4 Solo provides armed forces with flexible operational capabilities in both unmanned and piloted configurations."

The mission planning is prepared using a flight planning interface as per the digital terrain elevation data (DTED) map.

Meanwhile, the command and control (C2) interface of the W-4 Solo is integrated with a narrow band line of sight (LOS) data link with a range of 100nmi.

The data link sends mission planning updates to the helicopter. The C2 system also includes a wide band LOS data link for the transmission of payload imagery, video, and telemetry data collected by the rotorcraft.

Engine and performance of SW-4 Solo

Power for the SW-4 Solo RUAS / OPH helicopter comes from a single Rolls-Royce 250-C20R / 2 turbo-shaft engine, which generates a take-off power of 450shp.

The rotorcraft has a maximum take-off weight of 1,800kg and flies at a maximum permissible speed of 254km/h when remotely controlled, whereas the piloted version has a speed of up to 204km/h.

Its maximum range without reserve is more than 800km, whereas that with reserve is approximately 700km. The helicopter can be airborne for more than five hours.