The Sukhoi Su-30M is a multirole two-seater fighter, broadly comparable to the American F-15E. The Su-30MK is the export version of the aircraft. The fighter is a development of the Su-27 (Flanker) family, designed by the Sukhoi Design Bureau of Moscow, and is manufactured by the Irkut Corporation. The aircraft is equipped with similar avionics and thrust vectoring as the Su-37, for superior combat agility and manoeuvrability. The aircraft is armed with precision anti-surface missiles and has a stand-off launch range of 120km.

Cockpit of the multirole fighter

“The aircraft is armed with precision anti-surface missiles and has a stand-off launch range of 120km.”

The pilots are seated in tandem. The Su-30MKI for the Indian Air Force is fitted with an avionics suite developed by the Ramenskoye Design Bureau (RPKB).

The rear cockpit is fitted with a larger monochromatic screen display for the air-to-surface missile guidance.

The Su-30M can be equipped with a Phazotron N010 Zhuk-27 radar or a NIIP N011M BARS pulse Doppler phased array radar. The Su-30MKI is fitted with the N011M, which can track up to 15 targets simultaneously. The sensors include a rear-facing radar installed in the tailcone.

The Su-30M, like the Su-30, can engage two airborne targets simultaneously. The aircraft can be armed with up to six medium-range air-to-air missiles, such as the R-27RE (Nato codename AA-10C Alamo-C), the R27TE (AA-10D Alamo-D) or the Vympel RVV-AE (AA-12 Adder). 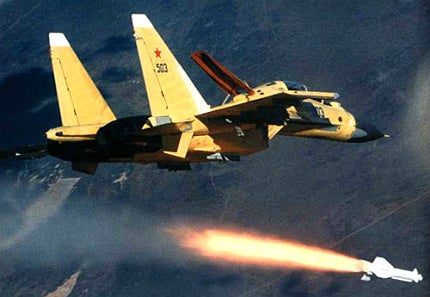 The aircraft has a stand-off launch range of up to 120km. For long-range anti-surface capability the aircraft is armed with two TV command guided missiles, such as the Kh-29 (AS-14 Kedge) with a 317kg penetrating warhead, the Zvezda Kh-31A (AS-17 Krypton) or the Raduga Kh-59M (AS-18 Kazoo).

For anti-surface ship missions, the aircraft is armed with a one Raduga 3M80E Moskit supersonic anti-ship missile. Indian Su-30MKI fighters are to be fitted with the Brahmos cruise missile, jointly developed by India and Russia. Brahmos has a range of 290km and a warhead of up to 350kg.

“The Su-30M can be equipped with a Phazotron N010 Zhuk-27 radar or a NIIP N011M BARS pulse Doppler phased array radar.”

The Malaysian Su-30MKM is fitted with a missile approach warning system and laser warner by Saab Avitronics in South Africa.

The Su-30MK is powered by two Saturn AL-37FP thrust vectoring engines, as installed on the Su-37 aircraft. The aircraft’s flight control system computes and manages the adjustment of the thrust and the vectoring for each engine. The nozzles are directed through ±15° in pitch. In an emergency, such as a system failure, the nozzles are returned hydraulically to a level flight position.

The aircraft normally carries 5,090kg of fuel in three integral fuel tanks in the fuselage and a single integral split tank, with each half installed in the outer wings. The maximum fuel capacity of the aircraft is 9,400kg.

“The fighter is a development of the Su-27 (Flanker) family, designed by the Sukhoi Design Bureau of Moscow.”

The single KND-27 nosewheel is hydraulically steerable and is forward retracting. A brake parachute compartment is installed in the tailcone at the rear of the fuselage.

The Indian Air Force ordered 40 aircraft in 1996 and an additional ten aircraft in 1998. A total of 18 Su-30K have been delivered, which were later upgraded to MKI standards. First deliveries of ten Su-30MKI full specification aircraft with thrust vectoring and phased array radar took place in September 2002 and deliveries were completed in December 2004.

Hindustani Aeronautics (HAL) is also contracted to build 140 aircraft in India between 2003 and 2017, as part of a licensed production agreement. The first indigenously assembled aircraft was delivered in November 2004. About 119 aircraft were delivered by the end of 2012.

In December 2012, HAL signed a contract with the Indian Ministry of Defence and Russian arms export agency Rosoboronexport for the production and delivery of 42 Su-30MKI aircraft to the Indian Air Force (IAF).

A total of 38 Su-30MKK and 24 navalised Su-30MK2 aircraft, which do not have thrust vectoring capability, are in service with the Chinese Air Force.

The Sukhoi PAK FA is a multirole stealth fighter aircraft being developed by Sukhoi of Russia.

Su-30SM is a multi-role fighter aircraft developed by JSC Sukhoi Design Bureau for the Russian Air Force. It is an advanced derivative of the Su-30MK combat aircraft family.

The AT-802U surveillance and light-attack aircraft is a heavily armoured version of the AT-802 agricultural and fire fighting aircraft, developed…

06 Jan 2021
Registration is disabled.
We use cookies to ensure that we give you the best experience on our website. If you continue to use this site we will assume that you are happy with it.Ok