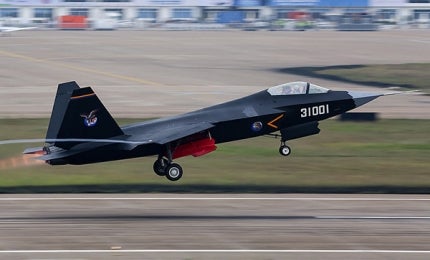 The Shenyang J-31 (F-60) is a fifth-generation, multi-role, twin-engine stealth fighter aircraft being manufactured for the People’s Liberation Army Air Force (PLAAF) by Shenyang Aircraft Corporation, an affiliate of Aviation Industry Corporation of China (AVIC). It is the second stealth fighter that China has indigenously developed after the J-20.

The J-31 fighter jet is intended to provide advanced defence capabilities in close-air support, aerial bombing and air interdiction operations. It can also perform suppression of enemy air defences and can be used as a carrier-based fighter on aircraft carriers. Initial operational capability of the aircraft is expected in 2020.

Known as the FC-31 fourth-generation multi-purpose medium fighter, the export variant of the J-31 fighter was also displayed at the Zhuhai Air Show 2014. The FC-31’s airframe and control surfaces are similar to those of J-31 but will be outfitted with angled vertical stabilisers, two large internal payload bays and an estimated payload capacity of 2,268kg. It can also be attached with electro-optical and sensor system (EOSS) pod and infrared search-and-track sensors below the nose.

The chined fuselage of the J-31 incorporates a pair of tailplanes. The rear edge of the fuselage is hinged with two vertical stabilisers. A rudder is installed on each stabiliser to control the aircraft’s movement. The aircraft is fitted with a tricycle landing gear. The nose landing gear consists of double wheels, while the main landing gear has a ‘dogleg’ structure.

The fighter jet has a length of 16.9m, height of about 4.8m, and a wing span of 11.5m. The empty weight is about 17t and the maximum take-off weight is 25t. The aircraft can carry out missions at medium and low-altitudes.

The aircraft is operated by a single pilot. The cockpit is enclosed by a transparent, two-piece canopy to provide increased visibility for the pilot.

The aircraft can be equipped with state-of-the-art avionics, including multifunctional displays, helmet-mounted sight, an electro-optical targeting system (EOTS), an attitude director indicator (ADI), and advanced sensors and communication systems.