Expand
The Shahpar UAVs are in service with the Pakistan Army and Air Force.
The Shahpar UAV can fly at a cruise speed of 150kph (81kts).
The UAV is powered by a Rotax 912 ULS engine rated at 100hp. Image courtesy of Greg Goebel. 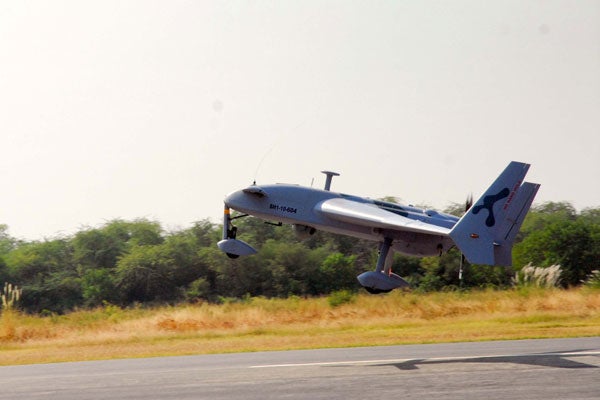 The Pakistan Ministry of Defence (MoD) commissioned the first fleet of Shahpar UAVs into the Pakistan Army and Air Force in November 2013.

The medium range Shahpar UAV was indigenously developed in co-operation with the National Engineering and Scientific Commission (NESCOM), a civilian controlled scientific and research organisation of Pakistan.

The vehicle has a length of 4.2m and wing span of 6.6m, and is configured with canard foreplanes positioned in front of the wings. The maximum take-off weight of the UAV is 480kg.

The UAV features autonomous take-off and landing capabilities. It can land on a runway independently or with the help of a manual pilot or parachute.

Payloads attached to the Shahpar UAV

Shahpar can be integrated with a variety of payloads to execute reconnaissance and surveillance missions during day and night environments. The vehicle is capable of carrying an optical payload of about 50kg.

The vehicle is also equipped with an autonomous global positioning system (GPS) based tracking and control system, with an option for manual control channel. It can carry additional payloads based on customer requirements.

Sensors of the UAV from GIDS

The Shahpar UAV is equipped with the latest airborne imaging equipment (AIE), Zumr-I (EP) multi sensor turret that supports the improved local security and mobility of the UAV. The sensor systems include a high end thermal imaging camera, low-light and near infrared (IR) TV, and an eye safe laser range finder (LRF) with a range of around 20km.

"The UAV is also fitted with Erica Plus, a high definition enhanced reconnaissance IR camera."

The electro-optical (EO) / IR sensors allow Shahpar to provide the commanders with geo referenced and geo pointing imagery of terrestrial targets. The UAV transmits the captured data to the ground control station through the real-time data link with a range of 250km.

The UAV is powered by a pusher-type four-stroke Rotax 912 ULS engine with four cylinders. The engine produces a power of 100hp.

Shahpar can fly at a cruise speed of 150kph (81kts) and can continuously operate for more than seven hours. The maximum operating altitude of the drone is 5,000m.

Key players involved with the Shahpar UAV development and manufacturing