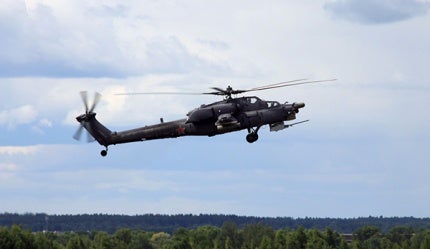 The Mi-28NE is an export variant of the Mi-28N helicopter developed by Rostvertol, a manufacturing arm of Russian Helicopters. The Night Hunter attack helicopter is designed to provide enhanced combat capabilities against land, air and sea-based targets.

The Mi-28NE Night Hunter can be deployed to identify and destroy enemy battle tanks, armoured vehicles, personnel, boats, small naval vessels, and low-speed and low-altitude aircraft. The combat helicopter can also be used to destroy protected sites and defence installations.

The attack helicopter was demonstrated during HeliRussia-2014, the VII International Exhibition of Helicopter Industry, which was held in June.

Based on the Mi-28NE, the Mi-28UB is a combat training helicopter designed by the Mil Moscow Helicopter Plant.

Upon completion of a series of test flights in 2007 Russia and Iraq signed a $4.2bn agreement for up to 36 Mi-28NEs, a number of other helicopters, and anti-aircraft defence systems in October 2012. The deal was approved by the Iraqi authorities in April 2013 and the Iraqi Air Force received the first three of the first batch of 15 Mi-28NE helicopters in July this year.

The first serial production Mi-28N helicopter was delivered to the Russian Air Force in mid 2006 and entered into service in December 2013. The Mi-28Ns are also in service with Iraq and Kenya.

Design and features of the Mi-28NE combat helicopter

The Mi-28NE Night Hunter attack helicopter, which is capable of executing missions under all weather conditions during day and night, incorporates a wide range of combat equipment and advanced avionics to deliver enhanced defence capabilities. It can perform manual and automatic nap of the earth (NOE) flight and has stand-alone solo stationing capability.

The combat helicopter is equipped with shock-absorbing landing gear and inflatable rubber bags, and features main and tail rotor blades made using composite materials. The normal and maximum take-off weights are 10,900kg and 12,100kg respectively.

The armoured cockpit is fitted with shock-absorbing seats and a parachute escape system for a crew of two. The portside and starboard cockpit doors and wing panels are installed with an emergency jettisoning system. The helicopter offers superior protection and increased situational awareness for the crew against small arms.

The helicopter can carry up to 16 Ataka-B air-to-ground missiles and eight short-range Igla man-portable surface-to-air missile systems. It is also armed with two Strelets air-to-air missiles, 80mm and 130mm S-13 rocket pods, B-8 V20A rocket pods with S-8 and B-13 L’1 weapons, and a movable weapon mount with a 30mm 2A42 cannon.

The helicopter offers fire protection for power equipment, hydraulic systems and other fire hazardous units and compartments. The engine compartment is insulated by airframe elements and the self-sealing fuel tanks are protected from explosion and fuel leakage.

Avionics on board Mi-28NE Night Hunter

The Mi-28NE Night Hunter combat helicopter is equipped with an advanced set of integrated avionics suites for automatic detection and tracking of targets during combat missions.

The helicopter is fitted with a helmet-mounted target identification and indication system to project images onto the visor and to determine the direction of proliferation automatically. An optical-electronic system is used to process the information collected by the helmet system. It is also used for observation, navigation and fire control tasks.

The helicopter also incorporates KRET’s airborne radar system and a receiving-transmitting antenna module to detect dangerous objects and meteorological formations. The radar enables the helicopter to remain invisible to the enemy. Other equipment aboard the Mi-28NE includes a dual-control system, CV-28 M round-the-clock target sight system, and a laser system.

The Mi-28NE Night Hunter is powered by two VK-2500 turboshaft engines manufactured by Klimov. Each engine generates a maximum take-off power of 2,200hp.