An MH-60R helicopter of Helicopter Maritime Strike Squadron Four One (HSM-41) and the amphibious dock landing ship USS Comstock (LSD 45) during a flight off the coast of San Diego in April 2006.

The MH-60R in flight off the coast of San Diego in April 2005. USS Comstock (LSD 45) can be seen background right.

An MH-60R helicopter of the Helicopter Maritime Strike Squadron 71 (HSM 71) being serviced. 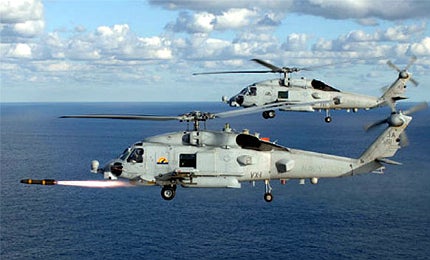 The MH-60R Seahawk is a multi-mission helicopter manufactured by Sikorsky Aircraft. It is considered to be the world’s most advanced maritime helicopter.

MH-60R Seahawk replaces the SH-60B and SH-60F helicopters in the US Navy’s fleet and combines the capabilities of these aircraft. The MH-60R is also referred to as ‘Romeo’.

The helicopter is fitted with a 2,721.55kg (6,000lb) cargo hook for vertical replenishment missions. Lockheed Martin, Owego, is the mission system’s integrator.

A possible foreign military sale of eight MH-60R helicopters and associated equipment to Mexico was approved by the US State Department in April 2018. The total estimated value of the deal is $1.2bn.

The maiden flight of the MH-60R took place in July 2001. The first low-rate initial production (LRIP) helicopters were remanufactured SH-60Bs, but the following MH-60Rs are all newbuilds.

The first new production MH-60R helicopter was delivered in August 2005. Operational evaluation (OPEVAL) was completed in October 2005 and full-rate production was approved in April 2006.

In March 2008, the MH-60R conducted first ‘at sea’ operations from the USS Preble (DDG-88) Aegis destroyer. First operational deployment of the helicopter was completed in early-2009 with the USS Stennis carrier group.

The helicopter operates from frigates, destroyers, cruisers, amphibious ships and aircraft carriers, and is suitable for intense littoral warfare operations for handling numerous contacts in confined spaces, and for open-water operations.

The MH-60 helicopter is fitted with dual controls and accommodates a pilot, co-pilot, and tactical mission officer. The sensor operator station is installed in the cabin.

The fully integrated glass cockpit is equipped with four 8in × 10in (20.3cm × 25.4cm) full-colour multi-function mission and flight displays that are night-vision goggle-compatible and sunlight-readable. The pilots and aircrew have common programmable keysets, a mass memory unit, mission and flight management computers, and MH-60R dedicated operational software.

The helicopter is equipped with a fully digital communications suite, with Link 16, ARC-210 radios for voice, UHF / VHF and satellite communications and a Harris Hawklink Ku-band datalink.

For anti-surface warfare missions, the helicopter can be equipped with a range of weapons on the four weapons stations, including Lockheed Martin AGM-114 Hellfire anti-surface missiles.

For anti-submarine warfare, the MH-60R can carry up to three ATK mk50 or mk46 active / passive lightweight torpedoes. A pintle-mounted 7.62mm machine gun can be fitted for self-defence.

For anti-submarine warfare missions, the helicopter is equipped with a sonobuoy launcher and a Raytheon AN / AQS-22 advanced airborne low-frequency (ALFS) dipping sonar.

The MH-60R is fitted with the Raytheon AN / AAS-44 detecting / tracking system, which includes a forward-looking infrared (FLIR) and laser rangefinder.

The helicopter’s radar is the Telephonics AN / APS-147 multi-mode radar, which has inverse synthetic aperture (ISAR) imaging and periscope and small target detection capabilities. Lockheed Martin was awarded a contract in July 2008 to develop a new radar system named AN / APS-153 radar, with automatic radar periscope detection and discrimination (ARPDD) capability.

Survivability of the Seahawk multimission helicopter

MH-60R is constructed with tolerance to small arms fire and medium-calibre high-explosive projectiles. The flight controls have dual-redundancy and ballistically hardened flight controls. The fuel tank is self-sealing. The helicopter is fitted with energy-absorbing landing gear and load-limiting crew seats.

The upper controls and hub are ballistically tolerant and the rotor blades are tolerant against 23mm rounds. The tail rotor has redundant fail-safe controls. The helicopter’s high-mass components are retained within the frame in the event of a 20/20/10G impact crash.

The modular transmission system is fitted with fail safe lubrication. The hydraulics and electrical systems are triple-redundant.

The helicopter is powered by two General Electric T700-GE-401C turboshaft engines rated at 1,425kW. The internal self-sealing fuel tanks have a capacity of 2,230l.

In June 2011, the Royal Australian Navy placed an order for 24 MH-60R (Romeo) anti-submarine and anti-surface warfare helicopters, to replace its 16 S-70B-2 naval helicopters under the US FMS programme. The helicopter deliveries began in early 2014 and were concluded in September 2016.

The US State Department approved a $360m-worth foreign military sale of equipment and support to support the upgrade of Australia’s fleet of 24 helicopters.

In December 2012, the Danish Government ordered nine MH-60R Seahawk helicopters and comprehensive logistics support for its Maritime Helicopter Replacement Programme. The estimated value of the contract is $686m.

Denmark received the first three MH-60R Seahawk helicopters in June 2016. The remaining deliveries will conclude by 2018.

In May 2015, the Kingdom of Saudi Arabia requested the sale of ten MH-60R multi-mission helicopters, spares and logistics support services.

In February 2020, India approved the purchase of 24 MH-60R multi-role helicopters from the US. The $2.6bn deal will be implemented under the US foreign military sales (FMS) programme.

The Sikorsky CH-53 Super Stallion heavy-lift helicopter first flew in 1974 and entered service with the US Marine Corps (USMC) in 1981.