Expand
T-Bird is a new light-armed intelligence, surveillance and reconnaissance (ISR) aircraft.
T-Bird ISR aircraft are being produced at LASA’s production facilities at Kazanlak airfield.
The aircraft is equipped with a single GE H80 turboprop engine. 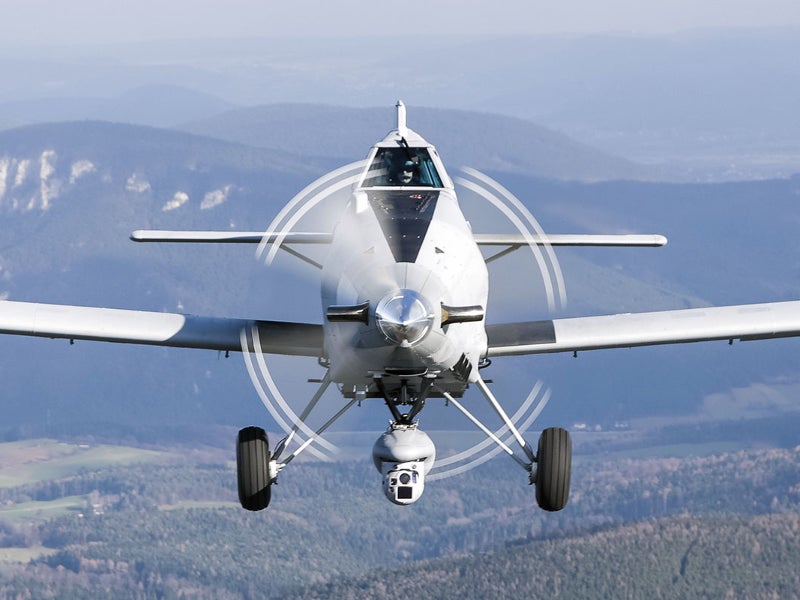 T-Bird is a new intelligence, surveillance and reconnaissance (ISR) aircraft developed by LASA Engineering. It is a light armed surveillance version of the Thrush 510G agricultural aircraft.

The aircraft is primarily intended for a range of missions such as ISR, light attack, counter-insurgency (COIN), border patrol, and internal security.

Design and features of T-Bird

The T-Bird aircraft is a rugged, long-endurance ISR platform based on the Thrush 510G airframe. Its under-fuselage is fitted with robust fixed landing gear for operations from unimproved runways.

The aircraft integrates active and passive ballistic protection kit to survive ballistic threats, whereas self-sealing fuel tanks are protected by an aluminium mesh liner to prevent explosion. The engine cowling is made of a 4mm steel sheet.

The cockpit of the T-Bird integrates armoured panels and bulletproof glass. It houses two crew members in tandem configuration with the pilot at a forward position and a sensor operator sitting in the rear. The night vision goggle (NVG)-compatible cockpit enables operations both during day and night.

The pilot station is equipped with two large multi-function displays, flight instruments and hands-on throttle-and-stick (HOTAS) controls. The operator work station at the rear is installed with two high-definition displays and a mission management unit (MMU).

“The aircraft is primarily intended for a range of missions such as ISR, light attack, counter-insurgency (COIN), border patrol, and internal security.”

The lightweight carbon fibre pod can be attached to the belly of the fuselage without the need for modifications to the airframe. The lug suspensions enable rapid integration on the aircraft. The aircraft integrates a complete surveillance mission architecture, which allows for further upgrades according to the mission requirements.

The self-sufficient pod supports wireless operation and is controlled from the operator station via Wi-Fi, avoiding the need for external cabling. The power supply from an internal, removable battery pack ensures the continuous operation of the pod for up to ten hours.

The Lynx command and control system enables the exchange of real-time intelligence and communication between the aircraft and ground forces. The long-range data-links enable the aircraft to conduct ISR missions up to a maximum range of 200km.

The T-Bird is fitted with six underwing hard-points, which can accommodate a range of NATO or Eastern European weapons such as rocket launchers, cannon pods and dumb bombs.

The aircraft is powered by a GE H80 turboprop engine driving a Hartzell four-bladed, reversible, constant-speed propeller. The engine develops a maximum power output of 800shp and is protected against foreign objects. The aircraft has the capacity to carry 2,760l of Jet A1 fuel.

The advanced power-plant ensures superior take-off performance and cruise speeds in hot and high conditions. The take-off and landing distances required for the aircraft are approximately 410m and 170m respectively.

The T-Bird aircraft has a never-exceed speed of approximately 300km/h. It offers a maximum endurance of up to 14 hours, and a maximum range of 1,750nmi at an operational altitude of 12,000ft.