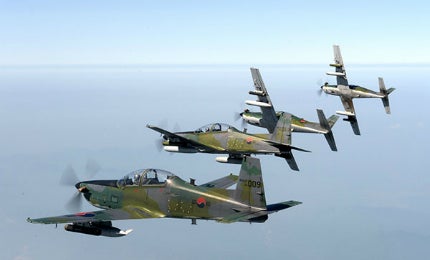 KA-1 is a light attack aircraft indigenously developed by Korea Aerospace Industries (KAI) for the Republic of Korea Air Force (ROKAF). It is based on the KT-1 single-engine basic trainer aircraft that is in service with the 15th Composite Wing’s 237th Tactical Control Squadron of the ROKAF.

The KA-1 is equipped with light-attack and forward air control capabilities and can complement fighter jets in air-to-ground attack missions.

KAI delivered 20 KA-1 aircraft to the ROK Air Force under a contract signed with the South Korean Ministry of National Defence (MND) in 1999.

The Peruvian Air Force placed a contract worth approximately $200m with KAI for 20 aircraft, including 10 KT-1 trainers and 10 KA-1 light attack variants in November 2012. The contractual scope includes technology transfers for the production of 16 aircraft at the local joint production factory in the Peruvian Air Dorce unit located in Las Palmas.

KT-1/ KA-1 will replace the EMB-312 and MB-339 aircraft operated by the Peruvian Armed Forces.

The KA-1 was jointly developed by KAI and the Korean Agency for Defence Development (ADD) between 2001 and 2003 under the KTX programme. It is equipped with advanced flight control systems and can carry conventional weapons and external fuel tanks.

Cockpit and avionics of the light attack aircraft

"The Peruvian Air Force placed a contract worth approximately $200m with KAI for 20 aircraft."

The KA-1 light attack aircraft features five hard-points, including two under each wing and one under the fuselage. These hard-points are fitted with LAU-131 seven-tube rocket launchers and HMP 12.7mm guns.

Power for the aircraft comes from a Pratt & Whitney Canada PT6A-62 turboprop engine driving a Hartzell four-bladed aluminium propeller through an epicyclical speed reduction gearbox. The engine, equipped with multi-stage axial and single-stage centrifugal compressor, has a rated power output of 950hp (708kW).

The aircraft is equipped with a retractable try-cycle landing gear, including two single-wheel main units and a steerable nose unit.