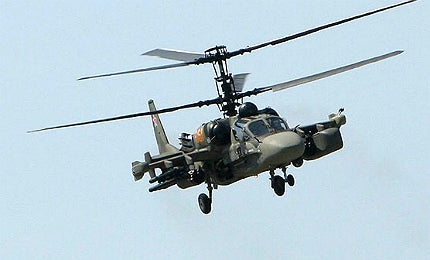 Ka-52 Alligator is an all-weather attack helicopter operated by the Russian Air Force. Developed by Kamov Design Bureau (part of Russian Helicopters), Ka-52 is a twin-seat variant of the Ka-50 attack helicopter.

“The first Ka-52 helicopter was rolled out in December 1996. The helicopter completed its first flight in June 1997.”

The Ka-52 helicopter can destroy enemy armoured and unarmoured ground targets, low-speed aerial targets and personnel at the frontline and in tactical depth. It is also deployed as a surveillance platform and aerial command post for a group of attack helicopters.

The first Ka-52 helicopter was rolled out in December 1996. The helicopter completed its first flight in June 1997. The serial production of Ka-52 began in 2008 at Progress Arsenyev Aviation plant in the Primorye region of Russia.

Russia plans to equip its proposed Mistral Class amphibious assault ships with Ka-52K helicopters. Ka-52K is a naval variant of the Ka-52 Alligator.

Orders and deliveries of the Russian helicopter

In December 2010, the Russian Air Force’s 334th Tactical Deployment Centre in Torzhok received three Ka-52s. The twin-seat Ka-52 will serve in the air force as a special mission helicopter.

Ka-52 incorporates a slightly modified design of the Ka-50 helicopter. The helicopter features a wider nose and an extended fuselage due to its twin-seat cockpit. The commonality of the airframe, components and systems of the two variants is about 85%.

“The Ka-52 will replace the Ka-50 Black Shark fleet that is in service with the Russian Air Force.”

In September 2012 Russian Helicopters, a subsidiary of Oboronprom, signed a long-term contract with Ramenskoye Design Company (RDC) for deliveries of avionics equipment. As part of the contract, RDC is responsible for the supply of avionics packages for Ka-52 attack helicopter and Ka-52K advanced ship-based variant between 2013 and 2020.

Armaments on the attack helicopter

The starboard side of the fuselage is fitted with a NPPU-80 movable gun mount installed with 2A42 30mm automatic gun. The six wing-mounted external hardpoints can be attached with different combinations of weapons.

The Ka-52 helicopter is fitted with a mast-mounted radome housing a Phazotron FH-01 Millimeter Wave Radar (MMW) radar with two antennas for aerial and ground targets.

Engines and performance of Russia’s Ka-52

The Sukhoi Design Bureau of Moscow, Russia has developed the Su-47 (previously called the S-37 Berkut or Golden Eagle) fighter aircraft, which first flew in September 1997.

A long-range supersonic interceptor aircraft, the MiG-31 Foxhound, a two-seat aircraft developed principally for the Russian and Kazakhstan Air Forces, was derived from MiG-25 Foxbat.