The IL-76MD-90A aircraft completed its maiden flight in March 2013.

The IL-76MD-90A under construction at Aviastar-SP's production facility. 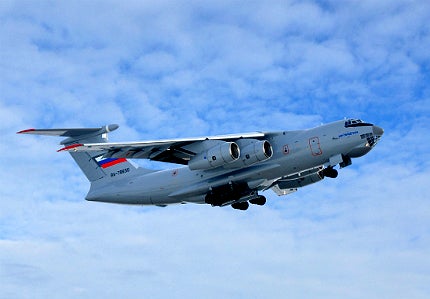 Ilyushin IL-76MD-90A is a new military transport aircraft (code name: IL-476) developed by Ilyushin Aviation Complex, a subsidiary of United Aircraft Corporation (UAC). It is a modernised version of the IL-76MD which itself is based on the IL-76 cargo aircraft platform.

The IL-76MD-90A cargo aircraft is manufactured at the Aviastar-SP production facility in Ulyanovsk. The factory test flight of the first IL-76MD-90A was concluded in January 2013.

The aircraft successfully completed its maiden flight test in March 2013, near Moscow. It flew at altitudes of 2,000m to 10,000m for a period of one hour and 55 minutes during the test flight.

The flight test programme of IL-76MD-90A is expected to conclude by the third quarter of 2014.

IL-76MD-90A is developed to transport a range of military equipment, armed personnel, heavy and long size vehicles and cargoes. It will also be used in parachuting cargo / troops and other air borne cargo missions.

Orders and deliveries of the Russian military transport aircraft

The Russian Ministry of Defence (MoD) signed a $4bn contract with UAC for the delivery of 39 IL-76MD-90A aircraft, in October 2012. The deliveries are scheduled to commence in 2014.

"The IL-76MD-90A cargo aircraft is manufactured at the Aviastar-SP production facility in Ulyanovsk."

The IL-76MD-90A is based on the same airframe and fuselage of IL-76 aircraft. The cargo aircraft integrates advanced features such as redesigned wing section, new cockpit with modern avionics and powerful engines.

The IL-76MD-90A has a maximum take-off weight of 210t and can carry a maximum payload of 52t. It can accommodate up to five crew members.

Cockpit and avionics of the Ilyushin aircraft

Il-76MD-90A is capable of carrying 126 parachutists or 145 troops in single deck arrangement and 225 troops in double-deck arrangement. It can also be installed with special equipment to carry 114 injured persons.

The aircraft is installed with an Aerial-Delivery System (ADS) for dropping of cargoes, transportation of armed forces cargo containers and pallets, and troop parachutes.

The cargo dropping system aboard the aircraft ensures the dropping of platforms laden with shipments and equipment. The under-ladder devices, roller ways and winches in the cabin allow the loading of cargoes and equipment into the aircraft.

The PS-90A-76 engine on board the IL-76MD-90A aircraft is compliant with latest ICAO requirements for noise and emission levels. An Auxiliary Power Unit (APU) TA-12A is installed onboard the aircraft.

Performance of the IL-76MD-90A

The life expectancy of the IL-76MD-90A military transport aircraft is 30 years. The aircraft can accumulate a maximum of 30,000 flying hours throughout its service life.

The An-124 Ruslan (Nato reporting name Condor), designed by the Antonov ASTC, based in Kiev, Ukraine, is a very large cargo transport aircraft.

The Ilyushin IL-78 air-to-air refuelling tanker aircraft is a four-engine tanker principally used for in-flight refuelling. It was designed and developed on the basis of a similar predecessor, the IL-76, and has the Nato reporting name Midas.