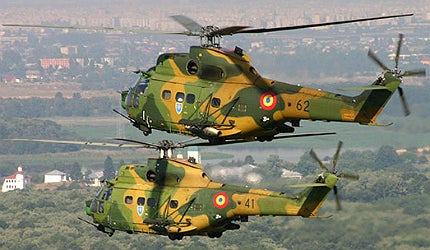 The IAR 330L Puma is a license-built variation of the SA 330 Puma helicopter. The helicopters are manufactured by Romania-based IAR Braşov. The Romanian Air Force operates the largest fleet of 104 IAR 330L helicopters.

Romania acquired the licence from Aérospatiale to produce the SA 330 Puma in July 1974. The first licence-built helicopter designated IAR 330H made its first flight in October 1975. The IAR 330H helicopter was subsequently modernised into the IAR 330L configuration. The IAR 330 helicopters were also exported to Pakistan, Sudan, Lebanon, Kenya and the United Arab Emirates.

Variations of the Romanian military helicopter

"Romania acquired the licence from Aérospatiale to produce the SA 330 Puma in July 1974."

The IAR 330L Puma SOCAT is an upgraded variant, fitted with an avionics package and new weapons system. The Romanian Air Force initiated the upgrade programme of the IAR 330L helicopters in the 1990s. Elbit Systems was selected in 1994 to supply Antitank Optronic Search and Combat Systems (SOCAT) for 24 helicopters. The programme was a joint effort of the Romanian Ministry of Defence (MoD), IAR Braşov and Elbit Systems. The first IAR 330L SOCAT helicopter completed its first flight in May 1998.

The development of the naval variant of the IAR 330L commenced in 2005. The helicopter was unveiled in January 2007. The Romanian Navy received three helicopters by March 2009.

The IAR 330M Nato Puma is an upgraded transport variant intended for military transport, search and rescue and medical evacuation missions. The helicopters are equipped with SOCAT avionics and Nato compatible communication systems.

Other notable variations of the IAR 330 are IAR 330 SM and IAR 330 VIP. The VIP configuration features luxury seating, LED lighting and entertainment systems.

The IAR 330L Puma incorporates an all-metal semi-monocoque fuselage. The fuselage is integrated with a cockpit and a 6.05m long cabin accommodating up to 16 troops. The power-plant is mounted on the top of the fuselage.

"The IAR 330L Puma SOCAT is an upgraded variant, fitted with an avionics package and new weapons system."

The IAR 330L Puma is equipped with advanced electronic warfare systems to counter enemy attacks. The countermeasures are provided by a radar warning receiver, laser warning system and a chaff and flare dispensing system.

The IAR 330L Puma is powered by two Turboméca Turmo IV-CA turboshaft engines. Each engine develops a power output of 1,160kW. The two turboshaft engines drive the rotor via a main gearbox. The fuel is stored in four main tanks and an auxiliary tank beneath the cargo compartment.

In November 2004, the Romanian Ministry of Defence awarded a contract to Avioane Craiova SA and Elbit Systems for the production of the IAR-99C Soim advanced jet trainer.

The Ka-50 Black Shark helicopter, developed by Kamov Helicopters JSC, carries the Nato codename Hokum A, with Hokum B the two-seat version, Ka-52.

I-Derby ER is an extended-range air-to-air missile developed by Israeli defence technology company Rafael Advanced Defence Systems. It is the…

ALTIUS-600 is a small unmanned aircraft system (UAS) designed to gather intelligence in real time. The UAS is part of…