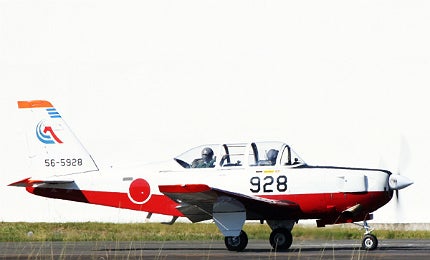 Fuji T-7 is a primary military trainer aircraft manufactured by Fuji Heavy Industries (FHI) for the Japan Air Self Defence Force (JASDF). The aircraft replaced the T-3 trainer that is in service with the JASDF.

"Fuji T-7 was developed in response to the competition for a primary trainer aircraft for the JASDF."

Fuji T-7 was developed in response to the competition for a primary trainer aircraft for the JASDF. The aircraft was a modified variant of the T-3 and was initially known as T-3 Kai. The T-3 Kai aircraft was preferred against the Pilatus PC-7 by the Japanese Defence Agency (JDA) in September 1998 to replace the T-3 trainer of the JASDF. The JDA, however, suspended the contract and reopened the competition due to allegations of corruption.

The competition was reopened and Fuji Heavy Industries was short-listed in September 2000. The JDA placed orders for a total of 49 T-7 aircraft. The maiden flight of first T-7 aircraft was completed in July 2002. The first production aircraft was delivered to the JASDF in September 2002. The operational tests of T-7 were concluded at Gifu air base in January 2003. The aircraft were transferred to Hofu Kita air base in April 2003.

Fuji T-7 is a longer and heavier variant of T-3 trainer. The aircraft incorporates a low wing monoplane design, including a modified cowling and wing. It integrates a turboprop engine in place of the piston engine used in T-3 trainer. The turboprop engine delivers high performance and reduces noise levels. The aircraft has an overall length of 8.59m, wing span of 10.04m and a height of 2.96m. The wing area of Fuji T-7 is 16.5m². The maximum take-off weight is about 1,585kg.

The Fuji T-7 trainer is powered by a single Rolls-Royce 250-B17F turboprop engine. It was developed from the 250-C20R+ turboshaft engine.

"The tandem-seat glass cockpit of Fuji T-7 accommodates two crew members including a flight instructor and a student pilot."

The engine delivers a take-off power of 450hp and a maximum continuous power of 380hp. The maximum internal fuel capacity of the aircraft is 375 litres.

The multifuel capable 250-B17F engine delivers an optimal power-to-weight ratio of 2.2:1. The engine is optionally fitted with a Beta valve for providing propeller reverse thrust.

Performance of the JASDF’s aircraft

The Fuji T-7 trainer aircraft has a maximum speed of 376km/h. The cruise and stall speeds of the aircraft are 296km/h and 103km/h respectively. The aircraft can fly at a maximum altitude of 7,620m.

The OH-1 is a light observation helicopter produced by Kawasaki Heavy Industries for the Japan Ground Self-Defence Force (JGSDF).