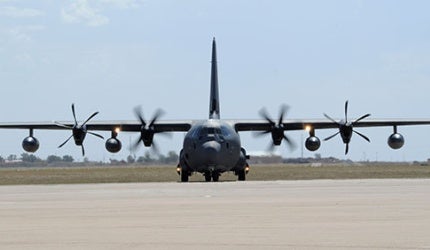 The Cannon Air Force Base (IATA code: CVS) is located 11km south-west of Clovis in New Mexico, US. The base is owned by the United States Air Force (USAF) and operated by the Air Force Special Operations Command (AFSOC).

History of Cannon Air Force Base

Cannon AFB’s history began in the late 1920s when Portair Field, a civilian passenger terminal, was set up on the site. Portair was renamed as Clovis Municipal Airport in late 1930s. The airport quickly transformed into Clovis Army Air Base after the United States entered World War II in 1942.

The base was renamed as Clovis Army Airfield in 1943 and received the 302nd Bombardment Group – the training unit for B-24, B-17 and B-29 heavy bombers. The airfield was placed on a reduced operational status in mid-1946. The Clovis Army Air Field was inactivated in May 1947.

The airfield’s ownership remained in the hands of Air Training Command until being reassigned to Tactical Air Command in July 1951. The base received the 140th Fighter-Bomber Wing, an Air National Guard unit, which reactivated the airfield as Clovis Air Force Base in November 1951.

The Cannon AFB is home for the host unit 27th Special Operations Wing (27 SOW). The 27 SOW plans and accomplishes specialised and contingency operations as an air force component member of AFSOC.

"The Cannon Air Force Base has a single 1,309m long runway surfaced with concrete."

The primary training space of the Cannon AFB is the Melrose Air Force Range training area. Sitting on 60,010 acres of land, it is located about 25 miles west of the base. The training range is used for air-to-ground, small weapons and electronic combat training. The training airspace at the Melrose Range is limited to 26,000ft. The nearby training airspace of Cannon AFB extends up to 50,000ft in some areas. The operations are controlled by an air traffic control tower and approach control facility.

Other facilities at the USAF base