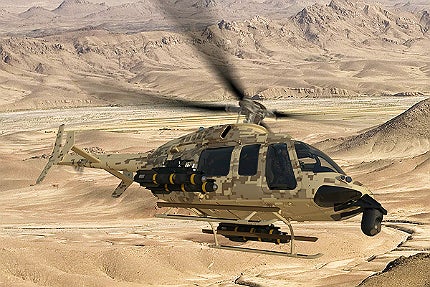 Bell 407GT is a light attack helicopter manufactured by Bell Helicopter Textron. The helicopter was introduced in March 2013 at the Heli-Expo conference in Las Vegas, US.

It is a multirole, multimission helicopter, which can be reconfigured to suit troop transport, medical evacuation, search and rescue or command and control missions.

The helicopter was exhibited at the ninth bi-annual LAAD Defense and Security International Exhibition in Rio de Janeiro, Brazil, in April 2013.

The 407GT is an armed version of Bell 407GX civil utility helicopter, featuring upgrades over the Bell 412 EP and 412 EPI helicopters. It is incorporated with universal weapons pylon (UWP) from Bell OH-58D Kiowa Warrior.

“It was exhibited at the ninth bi-annual LAAD Defense and Security International Exhibition in Rio de Janeiro, Brazil, in April 2013.”

The avionics also include Wescam MX-15DI and the FLIR Systems 230-H. A separate suite is included for aircraft survivability equipment (ASE). In addition, there is a tactical radio suite.

Weapon systems onboard the 407GT

The helicopter can be equipped with flexible and configurable weapon systems to carry out tactical operations. It can be fitted with the advanced precision kill weapon system (APKWS) developed by BAE Systems. In March 2013, the helicopter successfully fired seven 70mm APKWS rockets during a qualification test held in Yuma, Arizona, US.

“The helicopter can be equipped with flexible and configurable weapon systems to carry out tactical operations.”

It features a universal weapons pylon (UWP) that configures machine guns or rockets. The UWP provides a stable platform for precise delivery of ordnance, which can be configured quickly and can also be removed easily for other requirements, such as rescue or medical evacuation.

The helicopter can also be equipped with a variety of optional armament kits, which include a semi-active laser-guided 2.75in version of the existing Hydra 70 unguided rocket system with a range of more than 5,000m, AGM-114 Hellfire, General Dynamics GAU-19/B .50 calibre machine gun, mid-body guidance unit (WGU-59/B) and LifePort armour protection system. It also includes Dillon M13D mini-guns and HMP-400 machine gun pod.

Cabin details of the Bell helicopter

The wide cabin of the 407GT accommodates up to six passengers and one crew member. The cabin features a baggage compartment. It features high-visibility windows and doors, which can slide on both sides for quick ingress or egress.

During the Farnborough Air Show in 2006, Hawker Beechcraft formally announced plans for the next spiral development of the successful T-6 platform into the AT-6B aircraft for the net-centric battlefield.