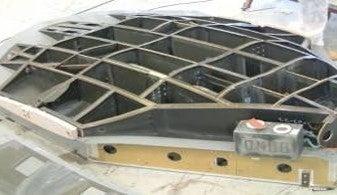 We design, manufacture and test airborne major and minor modifications on both commercial and military aircraft. CAeS has a full range of in-house competencies that are fundamental to the services provided. Our capabilities include aerodynamic and mechanical design, stress analysis, flutter analysis, certification and avionics in design work on any current, future or historic aircraft.

CAeS has a strong reputation in fixed wing, rotary wing and unmanned aerial vehicle (UAV) platforms and our extensive services include, but not limited to:

Projects extend from the initial requirements capture and concept design definition (including new airborne concept developments) through to delivery of modifications, installations, flight tests and delivery to the customer.

Wing hard-points on a King Air 350i to support 120kg. CAeS conducted a full mechanical analysis of wing structure and whole aircraft interaction, including flutter analysis of the wing-aircraft and ground vibration testing (GVT).

EASA and FAA certification for Tamarack Aerospace on their Active Winglets (ATLASTM). The winglets reduce the bending load in the wing, only increases the loads near the wing tip and significantly improving fuel saving and increased cruising altitude and climb rate.

Modification design and installation for scientific equipment on a Cessna 421C for the Met Office Civil Contingency Aircraft (MOCCA). This provides an airborne sensing capability in the event of national environmental incident. Includes external probes and intakes fitted for physical and chemical analysis, as well as analysis and processing equipment within the cabin.

Conversion of an RJ70 aircraft for the Empire Test Pilot School (ETPS). Design and installation of flight test instrumentation, which included strain gauges and potentiometers around the aircraft to measure the position of flying controls and flight surfaces.

Workstations were fitted for data logging and analysis hardware and a suite of cameras were installed, as well as a Wi-fi network.

EASA Part 21 DOA and POA for EASA Aircraft and for non-EASA aircraft under CAA.

Water Ingestion CAeS has the unique capability of operating water ingestion trials at the UK’s...