The exercise saw participation from members of the 13th and 14th Fighter Squadrons of Misawa Air Force Base (AFB), Japan. 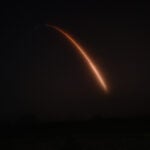 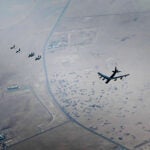 35th Operations Support Squadron operations assistant director Major Daniel House said: “Each (Pacific Weasel) provides opportunities to train in a larger event with other aircraft than we would be able to train with in standard day-to-day training.”

In 2018, the 35th Fighter Wing commenced practices for the large-force exercises. Each exercise iteration was enhanced and improved upon.

13th Fighter Squadron electronic combat pilot Captain Peter Magness said: “The (Pacific Weasel) exercises are a great time for us to fully mission plan, execute and debrief a mission set that is essential to Misawa and our host nation partners.

“We had the opportunity to train with SAM site operators. Misawa (AFB) is fortunate to have a series of emitters at Draughon Range that we get to train with, but the incorporation of the JGSDF into (Pacific Weasel) gives us an extra layer of realistic training for our Wild Weasel mission.”

The 35th Fighter Wing hosts the only units in the Indo-Pacific region whose mission includes suppression of enemy air defences or the Wild Weasel mission.